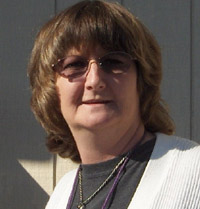 In the winter of 1995, after years of working for minimum wage, partying, heavy drinking and doing drugs Judith A. Berry hit rock bottom. At age 34, she was sent to CA State Prison on a drug charge. Luckily, her mother took custody of Judith's three year old daughter, so she wouldn't lose her. Locked up and removed from her loved ones, Judith resolved to change her life and her values. She decided to start living for her family and to make something of herself.

After an early release from prison for good behavior, Judith quickly proceeded to turn her prison resolve into reality. With the help of her parole officer, she was allowed to spend time with her daughter to regain her trust. Through a tip from a friend, she learned about the Goodwill classes that people on state assistance could enroll in through GAIN (now Cal Works). When she contacted GAIN, she met Ms. Beverly Barnes who told her to call MAEP for classes. A few days later, she met with MAEP counselor Jan Walden to discuss her academic goals, take an assessment test, and enroll in classes --Office Skills and GED. Her academic journey toward self-improvement had begun.

Judith started to attend MAEP in 1997. She says, "The first day in Yvonne Fernandez's Office Skills class, I thought to myself, `I've lost my mind.' I decided to give it a week. By the end of the first week in class, Yvonne and Francis Meier had made me feel so welcomed and supported that I knew in my heart it was a good thing. The GED class was taught by the same Jan Walden who had advised me earlier, so I felt really good and confident about what I was trying to do." Judith completed her GED in about 9 weeks and continued in the Office Skills class until 1998.

The Office Skills class consists of 4 levels with increasing difficulty, and many students drop the class without completing it. According to Yvonne Fernandez, Judith's determination helped her to complete all four levels. Because of her ambition, a fifth level was especially created for her and it is now a standard part of the curriculum. Judith was a great role model to others by having perfect attendance, excelling in all areas of the class and always making time to help the other students. Part of the contract, at each level of the Office Skills class, is to get work experience in the school's office. The MAEP office manager at the Metropolitan Center was very impressed with Judith's work.

Even before finishing her class, Judith started working at MAEP part-time as an instructional aide. Then in 1998, she became the aide in a morning ABE class and an afternoon ASE class. In 1999, she added the job of a half-time registration technician and in 2000, she was hired by Sheila Lunny, principal of the Campbell Unit, to be a full-time registration technician for TOPS. Her role as the TOPS technician expanded as she taught herself more and more about the program. Now she is the Accountability Specialist responsible for the state and federal reporting for all of MAEP.

Growing up in Staunton, Virginia, Judith Berry had a great childhood. She had a close family, participated in sports and made good grades. Matter of fact, she planned to graduate from high school in two years, but when she was told that she was short of credits to graduate that year, she lost her cool and quit school. At 16, she left home and struggled to make ends meet. She soon realized that a diploma does make a difference, but was too stubborn to go back to school. It took the harsh reality of life in prison, and a mother's love for her daughter to turn Judith around.

Judith is respected by teachers, staff and administrators for her knowledge of the TOPS and CASAS testing system and her willingness to help out wherever she is needed. In the future, she plans to attend college to get an AA or BA in computer and management. Her goal is to become an accountability coordinator.