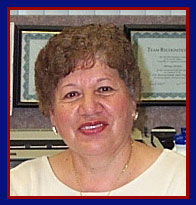 Maria Torres was born just across the border from San Diego in Tijuana, Mexico. Life’s circumstances did not treat Maria kindly. She was the middle child of six.  Her mother died when she was only eight years old, leaving her father to raise Maria and her four brothers, the oldest of whom was 14, and one sister, 12. Because of the expense of going to Secundaria, Maria was able to complete only six years of school in Mexico. Instead, she enrolled in the less costly business school to become a secretary.

As a young teenager Maria and her family immigrated to Encinitas, California in 1967. Life in her new country did not start happily for Maria. She was placed in a classroom with students very different from the friends she left behind in Mexico. Trying to learn a language she didn’t understand from a teacher who spoke only English was difficult, and Maria spent every day of her first month in school crying. Determination to be successful, she struggled through and in 1969 graduated from San Dieguito High School in Encinitas.

Maria married at age 23 and raised five children, two of which were from her husband’s previous marriage. It was a difficult marriage, and in 1987 her husband abandoned her leaving Maria as the sole support for her three children, two girls and a boy. They were 13, 12 and 5 years old. The youngest, a daughter, began having serious health problems when she was 21 years old and still lives with Maria.

Supporting herself and her family was difficult for Maria. Limited job experience and poor English skills were part of the problem, and she was forced to see help from social services. They directed her to Mira Costa Community College’s GAIN (Greater Avenues for Independence Program). Soon, life took a turn and everything began changing for the better.

Lack of self-esteem was Maria’s biggest obstacle in the beginning. The GAIN instructors helped Maria improve her English, recognize her own skills and competence, and helped her to see that she could be successful. Her self-esteem improved, and six months into the program, she had gained enough skills to be hired as a childcare aide at a Montessori School. A year later, she paid a visit to the GAIN instructors. In particular, Maria remembers Joy Talbergs who was then the program coordinator, and believes in the potential of every person. She encouraged Maria to continue to dream and grow to reach her goals. Maria also visited Toni Brown whose “tough love” helped her to persevere to meet her goals. As it turned out, there was an opening for an instructional assistant in the GAIN Program. Maria applied and was hired.

Having faced many of the same challenges as the students, Maria identified with them easily. She listened to the stories of the challenges they faced, and related to their feelings of low self-esteem and discouragement. Most importantly, not only could she tell them that change was possible, but she could prove it through her own example. She was the ideal role model for the GAIN students, and the more she helped them, the better she felt about herself.

Taking courses offered in Mira Costa’s noncredit programs helped Maria to continue increasing her skills and knowledge. She upgraded her office skills by taking a Vocational English as a Second Language (VESL) course in office occupations.  She also enrolled in a citizenship class, and on December 14, 1995, with family, friends and colleagues celebrating with her, Maria became a U.S. citizen. “Becoming a US citizen is a great accomplishment for me because I feel I have more opportunities in this country, not just for myself, but also for my family,” says Maria.

When funding for the GAIN program was cut, Maria became an instructional assistant in Mira Costa’s noncredit ESL program. She continued to inspire students and serve as a role model with the same passion she always had. When the Federal Workforce Investment Act changed how noncredit programs received funding, Maria assumed responsibility for the critical placement and assessment. She enrolled in CASAS accountability and TOPs Pro training.

Extensive work and family responsibilities don’t get in the way of Maria’s giving back to her community. She is active in her local parish, has volunteered in literacy activities, and has participated in local Latina conferences, serving on panels and sharing her experiences.

The enthusiasm new students have for learning English brings great joy to Maria. She is proud that she can help them meet their goals, and she works hard to inspire and encourage students, and in the process her colleagues become inspired. For Maria, success is contagious.

Maria plans to keep learning and to study technology, assessment and instructional techniques. Her story demonstrates how connecting students with the right opportunities opens doors that will never close. She built her success on the connections she made, and is now giving back to her community in a myriad of ways.