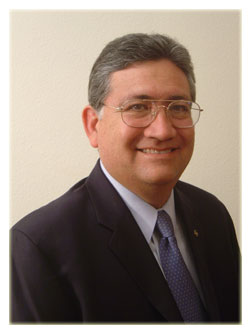 Ernesto B. Villegas came to the United States from Mexico in 1968 with a dream. He wanted to enter the world of business. At 18 years old he wasn’t sure what area that would be, but he had a dream. Fellow immigrants told Ernesto about the El Monte Adult School where he could learn English. Knowing that his future success was dependent on English fluency Ernesto enrolled in the English as a Second Language program at the adult school in 1968. Not only would he learn the language, but also the customs and how to live in his new homeland.

Eager to become an active, contributing member of the community as soon as possible, Ernesto spent his first two years, ’68 and ’69, learning English under the inspiration of teacher Leslie Jo Adams, whom Ernesto calls one of his “angels.” After completing the ESL program and learning English, Ernesto was able to finish his high school diploma and graduate in 1970. He also received a certificate of achievement in industrial drafting at Rio Hondo College, but decided to pursue another line of work.

As it is with most people, much of Ernesto’s education took place outside school walls. He joined a youth group at a local Catholic church, which provided a pleasant social outlet and a place to learn leadership techniques. It was also where he met his wife, Bertha, whom, along with his mother, he credits with helping shape his life. Their encouragement gave him the strength and assurance that he could accomplish whatever he put his mind to. Friendships also played a role in moving Ernesto toward his goals. Two of those friends were Ken from Burma and Pepe from Mexico. Ernesto and Pepe still get together on occasion, though it is many years since they first met.

In 1974 Ernesto's business career began with the purchase of two pieces of property from Mrs. Inez Rodriguez, a realtor who became his mentor and another of the "angels" in his life. She guided him through the world of real estate in which he has worked for over 29 years. For 23 of those years he has had his own agency, Villegas Realty. A graduate of the Realtor's Institute he has furthered his education in the real estate industry. A Notary Public for 29 years, Ernesto was one of the founders and board members of the Southland Business Bank, which is now part of Vineyard Bank. He represents both buyers and sellers in residential and commercial property sales.

Through all these years Ernesto has been active in his community. Among his many honors and awards, he is most proud of his service as a member of the El Monte Union High School District Board of Trustees from 1992-2001, the 1995 California Golden Bear Award for Exceptional Service to the Red Cross, and his 1997 Joseph Shenbaum Citizen of the Year Award given by the El Monte/South El Monte Chamber of Commerce. Ernesto was Rotarian of the Year in 2004 and is currently serving as treasurer for US/Mexico Sister Cities Association. He is very grateful to the community for supporting him with their votes during his years on the board of trustees. During those years he worked to build a career guidance program in the city's high schools because he knew firsthand how much such a service would have helped him when he was in the adult school. He also wanted to get as much technology into our schools as possible. Ernesto believes education is the key to one's dreams. He is never too busy to encourage and challenge young people to get training toward their goals, so they can achieve them.

As Ernesto ponders his future plans of spending more time with his wife and three grown daughters, continuing service to his community, and taking life a little easier, he is reminded that his road to success began when he enrolled in El Monte-Rosemead Adult School to learn English. He looks forward to enjoying long trips and continuing his education of the world firsthand.