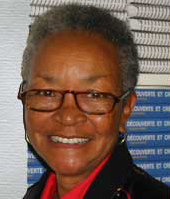 In 1985 Marie Henry was working as a secretary at United Airlines. As she looked around her workplace she realized that all the newly hired mechanics were a generation younger and earning twice as much. They were able to take breaks and go for lunch when the whistle blew. Something she wasn't able to do because of her responsibilities in the office. Marie had more responsibility but the mechanics had more freedom, more flexibility and more money. Marie's children were young adults, and Marie was in the third year of separation from her husband. Financially destitute and having no idea how she would meet expenses she picked up the Palo Alto Adult School catalog and saw that she could train to be an aircraft mechanic by going to school in the evenings.

Marie enrolled in the Palo Alto Adult School 's Aircraft Maintenance Technician School in 1986 at the age of 44, while continuing to work as a secretary at United because she couldn't afford to stop working. Having worked with mechanics for eight years intimidation in the predominately male atmosphere wasn't an issue. However, she did have to overcome her lack of mechanical experience. The instructor might compare something to a particular repair on a bicycle, and while Marie might not have had that reference point, she wasn't uncomfortable asking questions. This worked the other way too. The instructor might make some comparison that Marie clearly understood, but the men did not. Notes would be passed to her. "Don't you have a question?" it would say. That was her cue to help her, apparently intimidated, fellow students by asking for clarification. Unlike the men, Marie was never ashamed to admit she didn't understand something.

After obtaining the first of her two of three F.A.A. licenses in 1987, Marie was hired as a mechanic at United Airlines. She was now earning a living wage and had the promise of a pension that was two times what she would have received had she retired as a secretary.

Marie worked at United until 1997. Upon retirement she was recruited to teach in the Palo Alto Adult School Aircraft Maintenance Technician School. While she felt that she was not quite up to the experience she also felt the need to give back to the program that had given her the opportunity to improve her standard of living. She worked in the program for four years, bringing to it her skills as a secretary, a mechanic and a teacher. In addition to teaching, she overhauled the record keeping system, worked on a thorough curriculum revision and helped organize the shop.

Marie described her instructors as instrumental in her success as a student and a mechanic. Their history and knowledge were fascinating to Marie. She described an evening when one of her instructors, Don Reehl, saw that the students needed a particular sized screw to finish a job. The correct size screws were nowhere to be found. "Well, I guess we'll just have to make one," he decided, and proceeded to show the class how. That knowledge and resourcefulness is what the school tries to impart to every student. In giving back to the program, Marie was able to experience the thrill of watching students follow in her footsteps. When her most timid and terrified student passed her F.A. A. exams with nearly perfect scores Marie knew that her educational experience had come full circle.

For Marie, one of the most important things about adult schools is the availability of classes at times when working adults can attend. Earning a living has to come first, but the flexibility of adult schools present the opportunity to move up in the world.

Marie is a tireless advocate for adult education. The accessibility and affordability of adult education changes many peoples' lives. Marie is just one example.