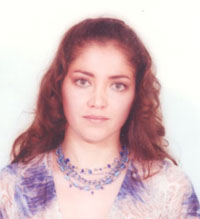 Alicia Durfee came to the United States six years ago, speaking only a few words of English. She moved to Davis, California, with her husband and immediately began looking for ESL classes. Within weeks, Alicia was taking ESL classes (days, nights, and weekends) at the University of California Davis Extension English Language Program, Davis Adult School, Davis International House, and Davis Senior Center. While learning English, she also taught Spanish to children at the Davis Art Center's Teach Another Language to Kids (TALK) program and to adults at Esparto Adult School. This was second nature to her. In her native country of Ecuador, Alicia had earned a B.A. in Spanish Language and Literature and had graduated from the professional teacher preparation program in secondary education, including student teaching, at the University of Cuenca. For more than four years, she had taught Spanish at a local elementary and secondary summer school, at a local high school, and at a private school for foreigners in Cuenca, Ecuador. Once Alicia had acquired proficiency in English, she began working as a classroom para-educator at Davis High School and as a teacher's assistant at Country Day Montessori School.

After a short time living in the Davis area, Alicia Durfee and her husband moved to Fresno, where she immediately continued to develop her English fluency skills at Fresno Adult School. She was always the shining star in the class. Spending as much as twelve hours a day taking ESL classes at Fresno Adult School and studying English at home, Alicia worked diligently to improve her skills. She began her career with Fresno Unified School District as a Bilingual Instructional Aide (BIA) at a local middle school, from where she would ride the bus to Fresno Adult School to continue her advanced studies in English. Alicia consistently went the extra mile and studied until she was able to pass the CBEST test that enabled her to apply for a teaching credential. Now that she speaks much like a native speaker, she is living her dream of teaching ESL to non-English-speaking immigrants — of which she herself was one just a few years before.

Alicia Durfee is a prime example of someone who has benefited from adult education to further her career. Upon her arrival in California, she was able to turn to adult education programs in two different locations to access the resources that she needed to improve her skills, pursue knowledge, and seek advancement — in short, to enhance her self-worth through lifelong learning. Alicia teaches from her heart, using all her university methodology, to help her students learn. She is often the example her students need to believe that they, too, can live out their dreams in this country. She is currently being sought out by high schools in the area for a full-time position as a Spanish language instructor.

In March 2001, Alicia Durfee was one of four representatives from Fresno Adult School to meet with then-Governor Davis to persuade him not to consolidate adult education into the Community College System. Thanks to the efforts of students like Alicia, Governor Davis rescinded his consolidation proposal. Her passion for learning, coupled with her active efforts to better herself, have served as a solid role model for others who have chosen adult education as their hope for the future.