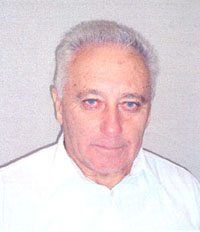 Lev Obolsky led a full life for 67 years in Russia, a country far in distance and different in culture from his new home in California. Those who know Lev may attribute the joy in his life for those many years to his own zest in seeking out ways to live to the fullest. As a young man, he married a woman both kind and bright, who supported Lev in his decisions. The two of them raised a daughter, while Lev used his university education as a geologist to work in the exploration of petroleum for the biggest company in Russia. The job's travels took him from the Ural Mountains to the far ends of Siberia in the western parts of Russia. Then, in 1998, Lev retired from geophysics at age 65. Life was to soon take a dramatic turn for Lev.

Lev and his wife, Sofiya, decided that since their 19 year old daughter had no intention of leaving California after spending time here as a student, it would be up to them to relocate from Russia. And so, with an attitude of positive and forward thinking, closure came to their comfortable lifestyle and they moved to San Francisco. Immediately the couple enrolled in the Adams School, a welcome center for recent immigrants. While in San Francisco, Lev became involved as a volunteer in the election polling. He realized the significance of his language barrier while working in San Francisco as a security guard for three years. Then on October 1, 2000, they moved to Petaluma in Sonoma County. They did not know a person there and could not communicate satisfactorily in English. They had only one goal as they looked forward, to be able to communicate with Americans. They had decided that what they wanted more than anything was to become 100% American.

Initially, Lev enrolled in Santa Rosa Jr. College to begin learning English. He took one semester of English grammar and two semesters of conversational English. The Jr. College advised Lev to begin attending the Petaluma Adult School for evening ESL classes. And so began Lev's journey to reaching his goals. Two years in an Adult School Beginning Low ESL class brought challenges, but Lev knew it would lead to an ability to communicate with others. Lev progressed and moved to the Intermediate level, where he studied for the next two years learning skills in English.

When asked about his view of Petaluma Adult School, Lev will respond in his typical energetic way by considering others beside himself in saying "Adult school is good for all students". Not only is there the opportunity for learning the skills taught, but "adult school brings together people from many different countries and ages to all learn together". Lev strongly believes that learning English becomes a vast education by promoting understanding, respect, and tolerance among all the students.

What made Lev successful as a geologist transferred to his studying English in Petaluma's adult school. His studies at the university in Russia were notable in that he always came to class prepared with the previous night's homework. He knew those study habits would help him to learn English. He needed to practice what class taught him and required that he strive for higher levels of learning; going from basics of communication by listening and speaking, to reading and writing. And he succeeded. Lev is not shy about how proud he feels to now be able to communicate with Americans. However, he did not stop there. Petaluma Adult School was to provide the venue for his next goal, to become a United States Citizen.

Becoming a citizen held much meaning for Lev. Learning about American History and the Constitution was fascinating. Lev wanted to integrate into the community while heading down the road toward citizenship. Consequently, in 2002, he worked for Dominos Pizza as a delivery person. This job put him in direct contact with the community of which he wanted so much to become a part. He got to know the people and learned the town's geography. Lev was happy, knowing he would one day become a citizen. Then, he retired in April 2003 at the age of 70 from his delivery job. Nevertheless, his community contacts did not end. He became the local fix-it guy and help-his-neighbor person.

Lev continues to volunteer at the Vintage Chateau, a residence for those 55+ needing living assistance. He brings them lunch from the Petaluma Senior Center. He is there to help the residents with repairs around the living quarters in order to help make life more comfortable. Lev also volunteers at the Petaluma Synagogue by doing repair jobs around the place. He was even there for his 92-year-old neighbor, Doris, when her dog recently became sick and he drove them to the vet.

In 2004, Lev knew his English skills were strong enough for him to work toward citizenship and he entered Petaluma Adult School's Citizenship preparation class. Success came in spring of 2005, when Lev received notice he had passed the test and is now a naturalized citizen. Yet, he was not satisfied. He wanted an American passport, which arrived in June 2005. The twinkle in his eye, the excitement in his voice as he finds just the English words to describe his journey to become an American brings a smile to all he encounters as they share in his pride. Moreover, his next goal is to travel across the United States from Sonoma County to the Northeast and Canada.

The journey has not been easy. Lev will easily talk about the affect of dramatically changing his life when over age 60. "It is difficult to study English at that age." He needed to read more than his younger years had required in order to remember. He met challenges in pronunciation skills. However, he was not ashamed to talk to people. It was his diligence, determination, and positive attitude that carried him along to his goals and successes.