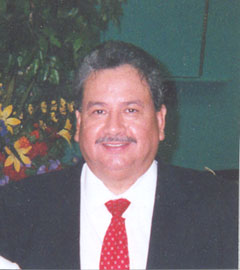 Marcus Terrazas is a true adult school success story! Marcus has overcome unbelievable barriers, and today he is not only an adult school graduate with a high school diploma but also a valuable adult school educator. His knowledge and experience afford him the opportunity to mentor other adult learners and to help them recognize and reach their potential.

Marcus's family immigrated to Central California when he was ten, but it was not a happy time for Marcus. At his new elementary school, Marcus was teased and called cruel names drawing attention to his physical uniqueness. He would spend recess time hiding in the bushes so the boys would not find him and taunt him. The most painful teasing was when the children would mimic him on the playground.

At his elementary school, Marcus had a 6th grade math teacher who was a Shriner. This kind man took a special interest in Marcus and sponsored him for treatment at the Shriner’s Hospital in San Francisco. After enduring countless surgeries, painful recuperations, and restricting body casts, Marcus at the age of 15 was standing tall and straight and was ready to return to school. But the old bullies were still there, and Marcus soon dropped out.

At first, Marcus worked at a service station with his dad; later, he found a warehouse job that offered a future to him. Marcus grew up, fell in love, got married, and became a father to his new wife's teenage daughter. But two weeks after his wedding, the warehouse closed and Marcus was without a job. There he was... newly married with parenting responsibilities, jobless, and with only a sixth grade education.

What was he to do? Where was he to go? Marcus spoke English quite well but could not read and write English beyond a third grade level. Although he was frightened and frustrated at the time, Marcus would realize later that losing his job had been a blessing in disguise.

Marcus and his wife had heard about adult schools and decided that he would go back to school. They both wanted him to learn to read and write English and, just maybe, someday get his high school diploma.

In September, 1997, Marcus enrolled in the ABE program at Clovis Adult Education. Attending classes days and evenings, Marcus made great progress and was soon reading and writing English. He then transferred to the high school diploma classes. Marcus was diligent. He again attended day and evening classes and took Independent Study. Marcus was driven and in 18 months, he earned his high school diploma. Marcus currently attends college in pursuit of his teaching credential.

Today, Marcus is an important member of the Clovis Adult Education staff. He is an instructional aide in ESL classes at CAE's Computer Technology Center (CTC), a school satellite where community members can take ESL classes and receive computer training. Marcus's influence and persistency have helped to significantly increase the ESL student enrollment, attendance, and achievement at the CTC. Most of the following activities are done on his own time:

Marcus's efforts have produced a 100% increase in student enrollment in ESL classes at the CTC, and 100% of the English Learners with whom Marcus works have demonstrated significant gains on the CASAS reading post-test.

Marcus is dedicated to helping ESL students learn English and become productive community members. Marcus attends workshops on his own time and creates study guides and worksheets for lower level ESL students. He relies on his experiences to guide him in developing relevant material. Many ESL students have said that Marcus has inspired them to continue with their education. Some have even gone as far as to state that the only reason they still attend class is because of Marcus's encouragement and persistence.

He constantly goes above and beyond the job description to help limited English speaking community members. An example is the time he spent his Saturday afternoon at a local bus stop talking to people about the benefits of attending adult education classes at the CTC. A man of high standards, he is also an advocate for anyone in need of learning, not only for community members but also for his own family. Today, Marcus's daughter is a university graduate and a biologist working for the California Department of Fish and Game. Adult education changed Marcus's and his family's life, and now in return he is helping others change theirs.