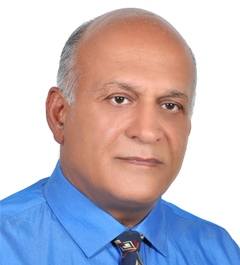 Vahid Khalili, an Iranian native, came to America in 1975 with only $275.00 in his pocket. He left Iran to search for new opportunities for himself and his family. While living in Iran, Vahid graduated from technical high school. He worked as a commercial airline mechanic. While working for the airlines, he studied and earned his certificate from the Federal Aviation Administration College, called A&P.

Four years after arriving in America, Vahid enrolled in an adult education program in South San Francisco where he studied ESL, U.S. History, and U.S. Government. When he moved to Marin County, he transferred to Tamalpais Adult School to complete his high school diploma. From the beginning, Vahid’s desire for knowledge about American government and how it works was exceptional. He literally devoured the assignments he was given and accelerated through the courses. He earned his high school diploma in May 1987. Vahid had no trouble finding a job in San Francisco as a BMW/Mercedes master tech with an Automotive Service Excellence certificate.

What defines Vahid as a student who has succeeded because of adult education is his quest for knowledge. He moved on to study at Santa Rosa Junior College. In 2001, he received his Associate of Arts and Science (A.A and A.S) degrees with honors in physics, math, and electronics. He also received an electronics certificate and completed the Microsoft A+ certificate program. He then attended Peralta/Laney and DVC Community Colleges and earned an A.A and A.S degree in Computer Science, Mathematics, Engineering, Chemistry and Physics. He was on the Dean’s list twice in San Rosa College. He was also selected for the National Dean's List and received a scholarship to the University of California at Berkeley.

Before Vahid pursued his education at the college level, he studied Holistic Psychology and was involved in different monasteries to study and research religion. From the age of eight, he trained in Japanese and Chinese martial arts; Shotokan and Qi-gong style. Vahid was a member of the Zen Center, Yoga Society, and Spiritual Healing Center of San Francisco. He learned and practiced meditation for over 33 years, which he believes to have contributed to his successful life in America. “I need education to support and to lead me to the dynamics of the art of living life,” said Vahid.

Vahid described what it is like to be a person from the Middle East in America. Like many others from that area of the world, he has been the brunt of insult and name-calling, especially since September 11, 2001. He has had to rise above the bigotry of a few individuals to pursue his goals and feel secure in his second home, America.

Vahid graduated from U.C. Berkeley with a Bachelor of Sciences in Electrical and Mechanical Engineering in 2008. During the course of his study at Berkeley, he was invited to intern at NASA’s undergraduate Student Research Program at Kennedy Space Center in Cape Canaveral, Florida. His position as an Aeronautic Space Test Engineer helped him to gain a higher level in his field of science. He believes his determined work ethic and his passion for education will help him advance in his field of sciences. He is looking forward to being an integral part of scholar research - investigating and defining the latest applications of science and technology.