Self-Help for the Elderly 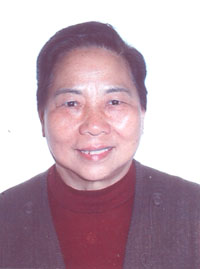 At the age of 60 when most people do not choose to make a major life change, Fung Hing Chu Lee and her husband emigrated from Hong Kong to the United States to be with their daughter and grandchildren. This was in November 1997; a time that was very difficult for elderly immigrants to start a new life in the United States due to welfare reform, nonetheless, Mrs. Lee was optimistic.

When she came to this country, Mrs. Lee did not know English and was unfamiliar with the American way of life. It took some time to get adjusted and she soon recognized the importance of becoming a United States citizen. In March 1999, she enrolled in Self-Help for the Elderly's basic ESL/Citizenship class held in Visitation Valley, a remote neighborhood in the southern part of San Francisco, isolated from many services yet with a growing immigrant community.

While living in Hong Kong, Mrs. Lee had worked as a primary school teacher for thirty-eight years, stopping only because she had reached retirement age. After having spent so many years standing in front of a class, she was now changing her role and becoming a dedicated student.

For more than four years, Mrs. Lee attended classes regularly and studied hard to pass her naturalization exam and become a United States citizen. She was a good student, rapidly promoted through all three levels of classes offered at the site. Her involvement with adult education did not stop there, as she realized that she could do more.

Mrs. Lee had developed a good relationship with her instructor, Martin Ko, and admired him for his teaching abilities. While being his student, she was inspired to teach again but knew that her English was not good enough. Working with her instructor, the two of them came up with an idea. A person who is aged 50 or older and has lived in the United States for over twenty years can take the naturalization exam in his or her native language. San Francisco has many such older immigrants who have spent most of their lives working and raising their families, without the time or resources to study. Although now they are older and have more time, they are still hesitant to enroll in an adult education program because of their limited English and education. Mrs. Lee became a volunteer teacher, creating a program that met a true need in community.

Although she was teaching primarily in Chinese, she was teaching her students many of the same lessons that she was learning from her instructor. The students were learning American history, basic English skills, and life skills. As her students became citizens and gained a sense of renewed confidence in themselves, they identified other opportunities to continue to study ESL. Not only did Mrs. Lee's students not speak English when they entered her class, but many were illiterate in their native language and had little or no formal education. For some of these older adults, this class showed that it is possible to go back to school or even to go to school for the first time as an adult.
Mrs. Lee was leading a busy life. Her time was occupied with teaching, attending class, studying, and caring for her husband and grandchildren. Her hard work paid off in July 2003 when she passed her naturalization exam and became a United States citizen. Now that she did not need to spend time attending class and studying, Mrs. Lee offered to teach an additional two citizenship classes as the interest and need in the community had grown.

Mrs. Lee wants to continue to share her experience and knowledge with others and to help them accomplish their goals and become active in the community. She feels strongly about helping people, especially seniors and new immigrants who can get lost in a new life and new culture. She credits the time she spent as an adult education student as the factor that motivated her to once again teach in front of a class in a new country.