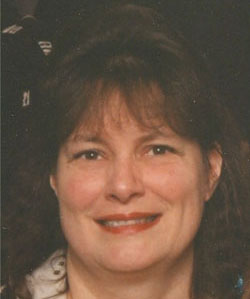 Susan Wall, vocational education teacher at the El Monte-Rosemead Adult School, loves sharing her "story" with students as her personal recommendation of adult education and telling how she has benefited from being an adult education student.

Growing up in Sacramento, Susan always enjoyed and did very well in school. In 1976 she graduated from high school and began attending Brigham Young University. After one semester, she dropped out, got married, and moved from Sacramento to El Monte. Susan needed to work. She gained employment as a secretary of the Parks and Recreation Department in the Senior Citizens Center. She very much enjoyed her work during the next seven years, but decided to spend time at home when her second child was born in 1984.

Susan's experience with adult education began in 1986 when she entered the El Monte-Rosemead Adult School's Parent Education program with her two-year-old daughter. Mrs. Betty Oden, her first adult education teacher, loved children and provided a fun, and creative program for them, as well as a "discussion" time for parents. She enjoyed that program for several years with two of her other children and there she also met a very dear friend who is now teaching for the Parent Education program.

When Susan's husband was laid off from his job, she decided she wanted to go back to school to update her skills for possible employment. Thinking she might be able to do medical transcribing at home, she returned to the El Monte-Rosemead Adult School and began taking computer and medical classes. The first computer class Susan attended was WordPerfect 5.1 for DOS, taught by Enid Glick. She soon took all of the computer classes and many of the medical classes. During this time her husband decided to start his own business, so Susan decided to take accounting classes so she would be able to help him with his books for the business. Things were very tough financially, and as much as she loved school, she had a hard time affording the cost of books, especially the medical and accounting books. Two of her teachers, Sandy Brown and Annette Felix, learned of her plight and helped her continue her education by loaning her books. She also received a scholarship, which was a tremendous help.

Because of the variety of classes that Susan had taken, many teachers knew her as a good student and in 1995, when a part-time job as an adult education assistant in the computer lab opened, she was encouraged to apply. Her fourth child, a son, was in kindergarten at the time; so part-time hours were good for her. This was the beginning of a new career at El Monte-Rosemead Adult School. Susan was assigned to the Vocational Technical Center where she enjoyed helping the students on an individual basis. While there she worked under the direction of Yvonne Gandara and Enid Glick, two of her mentor teachers. Susan was valued by her peers and after working for a short time, Michael Mullen, her former teacher and the lead teacher in the Computer Education Department, encouraged her to get her vocational teaching credential. So she began working on that process and in September of 1996, she started teaching computer classes. Susan has been a full-time teacher since 2001.

Students now benefit from Susan's knowledge in the many computer classes that she teaches, ranging from beginning to advanced classes such as Computer Literacy (Applied Computer Technologies) and Web Page Design (Dreamweaver). She enjoys her job and the variety of students she has taught over the years. Susan has presented and taught several workshops for staff and community members. Knowing first hand the difference a scholarship can make, she now represents the Computer Education Department as a member of the El Monte-Rosemead Adult School Scholarship Committee.

Susan is very involved with her five children and church responsibilities. Education is a high priority in their home and all the children have done very well in school. Her oldest daughter has graduated from Cal State Long Beach. Her second daughter has completed her third year at BYU Idaho. Her third daughter will graduate from high school this year with a GPA above 4.0 and will start college at BYU in Provo, Utah, with a scholarship for full tuition for her first year. Her son is finishing his sophomore year in high school. Her fifth child, a daughter, is in kindergarten. Her family remains her first priority and she attends all the various events where her children participate.

Adult education has helped provide Susan with an education, parenting skills, friendships, mentors, and a rewarding career. She is an advocate of lifelong learning as she supports and encourages her students. As for herself, she plans to go back and get her degree someday (maybe when the youngest goes!). With the changes in technology, she laughs and says that maybe they haven't invented what she really wants to study yet.