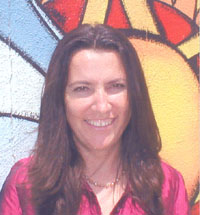 "And now, Superintendent and School Board members, I would like to introduce our District English Learner Advisory Committee member Elvira Ornelas…" This will be the introduction at the June School Board meeting of Ventura Unified School District. Whether she's busy as a "Mentor Mom" in an Adult Education Parenting class, working as a Child Supervisor, or as the bilingual PTA President, Mrs. Ornelas has grown and done more for her community in less than ten years in the United States than many citizens have done in a lifetime.

Elvira moved to Chicago from Jalisco, Mexico in May 1994. Soon thereafter, her first child was born prematurely in a hospital across the city from where she and her husband Roberto lived. Roberto worked long hours and Elvira had no transportation to the hospital without him. Elvira became depressed as she sat in her tiny apartment, unable to get to the hospital to visit her baby daughter, Ana Maria. She answered the phone calls from the doctors who would say anything from "She's improving" to "She's not responding." One time, Elvira tried to navigate the "L" to see baby Ana Maria, but she got lost in this confusing world of English and foreigners. After many frantic hours, her husband found her, but she was too afraid to venture out again. For several months, Elvira stayed buried in a deep depression.

Two years later, Elvira and Roberto had a healthy baby boy. She remained depressed until the family moved to Ventura, California in August 1999. Everything seemed to brighten for her with the Southern California sunshine.

Elvira found her first sense of community in a Community-Based English Tutoring class that we named Learning Is Fun Together (LIFT). The class was being taught in a mobile classroom parked at her daughter's elementary school. There was a cohesive group of students learning English, parenting skills, and how to be involved in the schools. One day Elvira shared with her teacher, "Ana Maria asked me to read to her in English for the first time." Always before, she wanted her Daddy to read to her. She had learned to read in English with the support of Learning Everyday Together books and cassettes that were loaned out from the LIFTmobile.

Concurrently, Elvira was studying English in the Adult Education ESL. As she continued in these two classes, Elvira began volunteering in her children's classrooms. Elvira blossomed as she learned to communicate in English and formed friendships with other parents and staff members at the school.

Back in the LIFT class, the class talked about various ways for parents to help their children be more successful in school. There were the personal ways to help within the family, such as helping children with homework and taking kids to the library, which tutors pledged to do and then documented on their activity records. Elvira logged numerous hours tutoring her children at home and taking them to enriching community events, such as events for children at the local museum. She definitely achieved one of her goals of becoming a better parent. There were also opportunities for school involvement at the school, such as the English Learner Advisory Committee (ELAC) and School Site Council. Elvira became a member of the School Site Council and ELAC, but there wasn't a PTA or PTO at her daughter's school. Elvira became proactive and helped develop a Parent Teacher Association to benefit all the children. The next year, she was elected President of the PTA. They held an incredibly successful Carnival to raise funds for enriching field trips for children. Elvira was an outstanding, bilingual, bicultural role model for all parents at the diverse school.

Elvira borrowed videos and papers from the distance learning component of LIFT to study for the citizenship test. She passed on her first attempt and went on to vote as an educated citizen. She is satisfied that she passed her driving test too and earned her driver's license.

Meanwhile, Elvira worked towards more of her personal goals. She enrolled in the Spanish GED preparation course. Even though she had only completed ninth grade in Mexico, Elvira mastered the competencies and passed all her tests. I think the education was valuable for Elvira, but the confidence it engendered was invaluable. Her goal now is to complete her high school diploma in English.

Elvira started working at the Elementary School as a Noon Aide. The job title is a little misleading. Noon Aides work 15 minutes to an hour off and on all day. It's a job filled with responsibility, yet remarkably low-paying. Elvira didn't mind because she knew she was getting worthwhile experience. She continued to come to ESL and EL Civics class during her intermittent breaks. She was the first student recognized with the Sylvia Vasquez Memorial Scholarship as the one with the most potential and sufficient need to continue her education.

Elvira used her experience as a responsible Noon Aide to get a job as a Child Supervisor for the First Five Family Center. She uses all her education and experience to develop a developmentally appropriate curriculum for the children of current ESL, LIFT and GED students. In just six years, Elvira has come full-circle. She's now a leader and role model in the Adult Education programs that helped her get ahead. She's also a Parent Advisor Facilitator for the First Five Family Centers of our area. She is a key player in their current evaluation process.

Elvira aspires to be a receptionist in a large corporation, kindly directing clients and managing a giant switchboard while maintaining her sense of glamour and a level head. She also dreams of helping older people in the community so they remain vibrant for many years.

Elvira has come a long way in a few years, but she hasn't quit learning. She still attends an evening advanced ESL class. She is investigating the Office Occupations program at Ventura Adult Education so she can continue to pursue her dreams, but first she has to plan next week's curriculum, teach toddlers, mentor other moms, and prepare for the DELAC meeting. She's a busy leader in our community.