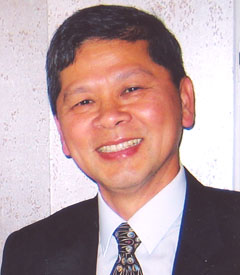 When Henry Theny and his wife, Susanty, opened a jewelry business in Jakarta, Indonesia in the early 1980s, they were determined to succeed, and they did –for a while. Soon, however, the Indonesian economy began to falter and Henry and his wife realized they had to make a change. What would they do? A high school graduate, Henry, dreamed of finding a new profession through higher education, but those doors were closed to him. Even though he was young, intelligent and determined, it was too late for him in Indonesia. Universities were not open to married people. Fascinated with the new field of computers and dreaming of further education, Henry and Susanty, like so many other immigrants, turned to the United States for opportunity.

Today, a successful database analyst in the insurance industry, Henry Theny still remembers his struggle as a new immigrant to gain a foothold in American society. Free ESL classes offered by the Noncredit Division of the San Francisco Community College District (now City College of San Francisco) welcomed Henry into his new society and helped him establish a firm foundation for his future success.

When they arrived in San Francisco in 1983, Henry and Susanty had heard about the free ESL classes near their apartment and they soon enrolled in the City College noncredit adult program offered in the afternoon and evening at Galileo High School. The classes were open-entry, and Henry and Susanty were able to begin studying English as soon as they arrived. Henry knew some English, and after taking the placement test, was assigned to ESL 300, an intermediate class that focused on listening, speaking, reading and writing. He also took conversation and writing focus classes

Taking five hours of English classes a day, Henry worked the night shift as a driver to have more time to study English. At home he had to encourage his desperately homesick wife who cried everyday. He told her they couldn't give up: they had the prospect of a new life.

Just as life seemed to be going so well for Henry, he learned his wife faced a life-threatening illness that would require several years of determined and difficult treatment. She needed her husband's support.

Henry began working at a local hospital. Although he made a good living, he became extremely depressed by the plight of his patients. Again, Henry used education to move forward. He enrolled in business and computer classes at San Francisco State University, eventually earning a BS degree.

Henry believes in giving back to the community that made his dreams possible through educational opportunities denied him in his native country. Whether wrapping presents at the YMCA, teaching computer skills to seniors at the Jewish Community Center or tutoring immigrants preparing for the citizenship test through Project SHINE (Students Helping in the Naturalization of Elders), Henry remembers his own early days in the United States and his own struggle to learn English. "I let them know I am here to help, not to judge."

What does the future hold? Henry's not sure. While he truly enjoys his work as a database analyst, he has discovered he loves teaching computer skills and is considering working towards a teaching credential. Wherever Henry's dreams and determination take him, his success in the United States has been based on his ability to listen, speak, read and write English skills he first acquired in free ESL classes at City College of San Francisco.