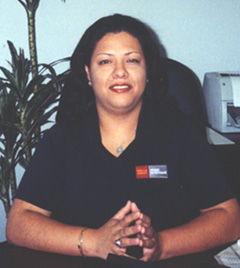 In September 1996, Viridiana Ramos was a shy teenager. She had dropped out of high school in the 10th grade after an embarrassing situation in her English class had revealed a serious reading problem. Lacking encouragement from her family to find help and stay in school, she remained at home for the next two years. During that time, her mother taught her how to cook, shop for food, clean house and take care of her ailing father. An obedient daughter, she did as her mother instructed, but always at the back of her mind was the yearning to work on her life goals: complete her high school diploma, go to college and get a good job.

That opportunity came to her through her older sister, Norma, who at the time was working as a waitress at a local restaurant. One evening, a retired couple was dining at her station and spoke with Norma, asking her about her education. They happened to be volunteer tutors in the Montebello Adult School Literacy Program. Norma told them about her sister, Viridiana, and the gentleman handed her the literacy program’s business card, telling her to call for help.

When Viridiana first visited the adult school office, it was difficult for her to make eye contact; school was still a place of great insecurity. She was assured that before she was placed back into the classroom, her teachers would first work on her reading skills. This assurance helped her to relax. Her initial reading score was low, she read slowly and haltingly, and lacked writing skills.

The following week, Viridiana began studying with her trained volunteer tutor. Every Tuesday and Thursday morning they met regularly, beginning first with a review of phonics, then easing into reading and spelling and eventually into writing. Eager to improve, Viridiana worked hard, and after nine months, she enrolled in the adult school Independent Studies Program. She studied every day from morning to afternoon; she also continued to meet with her tutor two mornings a week.

An amazing transformation occurred over the next few years. Viridiana changed from being a self conscious, insecure teenager into a self confident and outgoing young woman. She thrived in the adult school setting and gained the confidence and skills to sail through the 145 credits she needed to graduate. What had formerly been a life shadowed by difficult circumstances including a reading disability, low self esteem and lack of family support, was now a life filled with hope, dreams and possibilities.

While working on her diploma, she also tutored two elderly gentlemen two mornings a week for nearly a year. This dedication to helping others resulted in her being awarded a President’s Student Service Award. Viridiana received a certificate signed by President Clinton as well as a letter from the White House.

Her graduation in June 2000 was the highlight of Viridiana’s life, and she had the added honor of leading nearly 300 of her fellow graduates in the flag salute. Over the years, her family had begun to support her educational endeavors and was finally able to admit pride in their daughter’s accomplishment. Viridiana was the first family member to ever receive a diploma, and she had the further honor of being awarded an adult school college scholarship.

That scholarship was put to good use when Viridiana entered East Los Angeles College in the fall of 2000. After completing two semesters, Viridiana was faced with a new responsibility. Her father’s health had deteriorated further and Viridiana realized that, as the only child at home, she would need to become the family’s primary breadwinner. Her dream of receiving a college diploma had to be put on hold as she started her search for a full time job.

Luck was with her once again as she got a job with Wells Fargo Home Mortgage as a customer service representative. Viridiana says that she is extremely happy with the bank and her future plans include a career with Wells Fargo and hopefully, a chance to return to college. In her words, “I can hardly believe how my life has changed over the past few years. Before I went to adult school, I was scared and insecure. Now I feel I can really do what I’d love to do.”