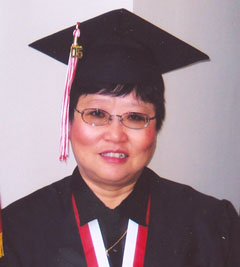 Susanty Theny arrived in San Francisco in 1983 with her husband Henry and hope for a better life. Ethnic Chinese from Indonesia, Susanty knew no English and had to start at the beginning. She soon enrolled in her first English as a Second Language class in the noncredit division of City College of San Francisco. Susanty was placed in ESL 50, the beginning class. Determined to learn, she systematically worked her way through the seven levels of noncredit ESL instruction, all the while keeping her eyes on her larger goal: a college degree.

Susanty studied diligently, but often felt frustrated by her new country and new language. In spite of feeling discouraged and tempted at times to give up her dreams, Susanty completed the seven levels of the noncredit ESL program in two years including summer sessions. The noncredit ESL program gave Susanty the tools to tackle her next project: an AA degree.

She began studying in the credit division of CCSF. Unfortunately, just as she began to feel her dream of higher education was in sight, Susanty was beset by a life-threatening illness and was forced to drop out of school. For the next five years she fought her illness, using the English she had learned to navigate the medical system.

When she recovered her health in 1990, Susanty began doing childcare. She also started taking City College credit classes at night with the aim of earning an AA degree. In 1994 Susanty’s interest in children led her to apply for work as an instructional aid in the San Mateo County School District. She offered to help in the special education class where assistants were acutely needed. Over the past 11 years, Susanty has helped hundreds of students reach their IEP (Individual Education Plan) goals. The job has been demanding, but Susanty has persevered. She learned enough Braille to work with students with visual impairments. She learned sign language so she could assist students with auditory impairments. She has assisted students with autism. When asked about her job, Susanty said, "I like to see the students grow. I am happy to be part of their learning." None of this would have been possible without the English she learned in her first noncredit classes at City College of San Francisco.

This semester, Susanty is completing the requirements for her AA degree, finally achieving her goal, twenty-two years after she first enrolled in a beginning adult education (noncredit) English as a Second Language class. Her serious health problems delayed, but never extinguished, her determination to earn a college degree.

Susanty has used the English she learned in adult education, not only to reach her own goals, but also to help others. As a volunteer at the public library, she has read stories to children and taught teens knitting and quilt-making.

Susanty is currently participating in Project SHINE, Students Helping in the Naturalization of Elders. As part of a national service-learning program, students from credit classes assist immigrant elders as they struggle to enter American society and study for the citizenship exam. Susanty comments, "These students reflect me when I first came here. It makes me happy to help."

Susanty's future plans include continuing to work as an instructional Aide as well as volunteer work. She's not sure, but she might even continue her education.