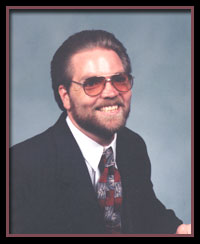 Wesley Farris was driving home when the accident occurred. It was "car versus tree," and the tree won. "I woke and could hardly move," recalls Wesley, "and when I realized what happened, I didn't want to live." At age 18, the 6' 6' former high school football star who had dropped out at 17 to become a forklift operator, was left a quadriplegic.

A tragic life-change for anyone, it was especially so for the active Wesley. Of the days that followed he says, "I stayed at home and played computer games. The days were long for me."

With the support of his mother Naomia, a single parent, he worked through physical therapy, depression and adjusting to a life of dependency. Naomia has been his nurse, physical therapist, counselor, driver and cook, to sum it up, as he says, she has been his everything. "She helps me bathe, prepares my meals, gets my medications, helps me dress, lifts me into and out of bed, straps on my lenard boots to prevent sores, and yes, puts me into my wheelchair."

Wesley wanted to return to school, but he also wanted to help his father pursue a dream of visiting every state. His father died in 1992, having missed three states. "Now its your turn to do what you want to do," his mother told him. He decided to go back to school.

"I started at a trade school to learn more about computers," says Wesley. He was learning through a program at Goodwill Industries. "I discovered that I enjoyed learning different software programs. I knew if I didn't have my high school education, I wouldn't go too far and I wanted to support myself. I looked for an adult school that had computers, so I could do my work for myself. Redlands Adult School had them so I started attending classes in February 1994 and finished my GED on January 18, 1996."

Redlands Adult School Principal Cherry Bordelon recalls, "Wesley prepared for the tests using the GED software in the computer lab. Although he can move only two fingers, he was able to independently use a computer without adaptive devices. Special test accommodations were requested and granted. One by one, the tests were administered and there was no lack of volunteers to assist him. Strictly adhering to the test parameters set by the GED office, Wesley persevered through multiple hours of testing. Although these testing sessions were physically challenging for Wesley, he was determined to succeed. His persistence, positive attitude and sense of humor inspired both staff and students. We have all been enriched by his accomplishments that at one time seemed so elusive."

Wesley wrote these words some time after earning his GED. "My life changed a lot because I realized I do have a brain. I now look forward to going to community college every day and can't wait to get there. I have many hard subjects but I'm not going to quit. I plan to finish community college and go on to California State University next year. My goal is to become a child psychologist. I'm looking forward to helping other people achieve their goals. I counsel other physically challenged students encouraging them to never give up. If I can do it, others can too." He has since gone on to achieve these goals, and more.

He earned an Associates Degree, then went on to earn a Bachelor's Degree in psychology from Cal State, San Bernardino in June 2003. "While a student there, he co-wrote a paper with four other students and submitted it to the American Psychological Association, "recalls Principal Bordelon, "The paper, 'Family Violence Impacts Child Custody – a Study of Court Records," was accepted and Wesley was invited to present the paper at the APA conference in Honolulu last July. He has been invited to present another paper on the topic of researching court records for cases of abused children, men and women to the Women's Psychological Association conference in Portland in April."

"While a student, he actively advocated for improved accommodations for the disabled," she continues, "When he started at the community college, there was little to no help for him. Rather than just complain, he decided to do something about it and worked to make changes that would benefit all of the disabled students on campus. Of his CSU experience, he states, 'My experience at Cal State was a very rough and pleasant one.' The rough part was dealing with the disability and the need for accommodations, but the pleasant part was working with all of the professors. Wesley expanded his advocacy to the city of San Bernardino attending city council meetings to advise them on the inadequate accommodations currently existing in the city.

"Since attaining his BA degree, Wesley has volunteered at Loma Linda University Medical Center and at Rolling Start, a non-profit organization that offers services for the disabled. He has just completed peer advisement classes there. His goal is to be accepted into the Masters program in the Department of Psychology at CSU San Bernardino so that he can reach his goal of being a licensed psychologist. Having witnessed his determination and perseverance, I have no doubt that Wesley will continue to succeed."

"Wesley has made me so proud, considering he dropped out of high school and had his life altered," says Naomia. When asked why he decided not only to return and finish school, but also to climb the education ladder, Wesley responded, "it's my turn to try to take care of my mom, I want to get a job and give something back for the years of love and nurturing that she continues to give."