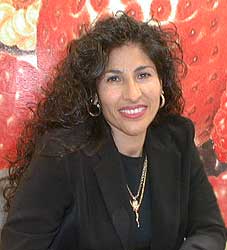 Devorah Hernandez came from Mexicali, Mexico, to the United States in 1988 with her husband and her two children to look for a better future, to make the American dream come true. In her homeland she had completed high school and two years of office skills and worked as a secretary in a bank. Since 2002 she has worked as a Food Safety Coordinator at Driscoll's Strawberry Association.

When Devorah arrived in the United States, she felt overwhelmed, lonely, and uncertain, not only about her future, but about her present. At first, she worked as a babysitter and at a fast food restaurant. After eight months of living in Salinas and sharing a house with another family, the young couple moved to Watsonville, where Devorah started working in the fields. Field work wasn't easy, but without speaking English, it was the only way she could think of to make money to support her children. But, she wasn't happy, and didn't want to see her children growing up working in the fields, not because she was ashamed of it, but because it is very strenuous work. Tired of working long hours to make ends meet and yet never having enough, she decided to quit in 1998 and, with her husband's full support, enrolled in Watsonville/Aptos Adult Education to study English.

School was very challenging. It wasn't easy to study, to work, and to raise a family. Devorah's youngest child was a baby, they had no car, and she worked part-time as a housekeeper and a jewelry salesperson. "It was hard to balance my schedule between work, school, and family, but with discipline and desire, I knew I would survive."

At school she learned English, how to work with computers, and to have a nice attitude. "At first I needed a lot of guidance, which I got from my teachers, who always believed in me and encouraged me to move forward." In the year she studied at Watsonville/Aptos Adult Education, she learned English, completed her GED in Spanish, and attended Office Skills classes. "There was a big difference in my life before I came to school and after. Before, I couldn't even go to the store because I was afraid to speak; after, I felt much more comfortable in all areas if my life."

Devorah got a temporary job as an office assistant at the Pajaro Valley School District, and she also did volunteer work at the Spanish newspaper, El Andar, where she translated articles and typed them on the computer. Her teachers at Watsonville/Aptos Adult Education encouraged her to continue her studies at Cabrillo College , where she took more computer classes and higher level ESL classes.

Because Devorah was always looking ahead, looking for ways of self­improvement, she decided to take ESL/Citizenship classes at Watsonville/Aptos, and in 1995 made her dream come true by becoming an American citizen. She was also able to take care of the legal papers for her children who were now nine and fourteen years old.

A few years later, Devorah went back to work in agriculture, this time as a quality control inspector with Driscoll's. After five years she became a secretary in the same company, and three years later, she became food safety coordinator. "When I first started working in this new position, I was so scared! Now I feel more confident, and I am very happy doing what I do."

In her current job, she needs office skills, some knowledge of the Pest Control Advisor position, a great deal of communication skills and people skills, and muchas ganas de trabajar (much desire to work). "Working here, I have learned a lot; Driscoll's has given me the chance to develop my skills, and I have taken every bit of advantage of these opportunities! In this position as food safety coordinator I travel to different cities in the U.S. and Mexico, and I feel very proud of myself because I have the chance to work assisting agriculturists and farmers, as well as to stay in touch with la gente de campo (peasants), simple and hard-working people, con mucho espiritu (with a lot of spirit)."

Devorah considers herself una mujer de decision (a self-determined woman), always looking for opportunities to develop herself and to improve her family's well-being. "My goals now are to continue taking opportunities in life, keep learning, and encourage others to succeed. It is never too late to go to school and learn new things. There may be some lucky people out there that succeed without going to school, but I believe that education is the true key to success."

Four years ago, she and her family moved back to Salinas , where she was awarded the Latin People Succeed Award. "My life hasn't been easy, but I believe that when you really want to do something, you can achieve it with sacrifice and effort. I have overcome many personal and professional obstacles and challenges, and I still have much to learn."

Devorah thinks that in the U.S. she has grown as a person, personally, professionally, and spiritually, and she is completely thankful to God. "I always recommend to people who come from other countries, to study as much as they can because in this country, the land of opportunities, education is the true key to success, I suggest that they study math, grammar, reading, speech, and spelling. Be positive, optimistic, and realistic, and don't be afraid to try new things. We are human beings and are allowed to make mistakes. To move up in our work and in life, my suggestion is to apply the 4 D's: Dios, Deseos, Decision y Disciplina (God, Desire, Decision, and Discipline)!"