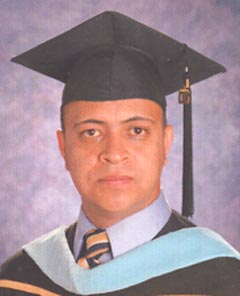 After working in the fields for a short period of time, Jose Noe (Pepe) Rodriguez moved to LA and started Adult School ESL classes in 1988 at the Manual Arts-Jefferson Community Adult School in the LAUSD. He began in level one. His first teacher was Ms. Elaine Sunoo.

While attending school to learn English, Mr. Rodriguez was working in a sweatshop in Los Angeles. He noticed that people speaking English would normally be more respected and get the best paying jobs. So he decided to register at the local adult school. It was a place plagued with gangs, so He decided to attend one of its branch locations, John Adams Middle and Adult School, there He went through the ESL, Reading, and began Diploma Plus programs. He learned English, got his 8th grade Diploma, passed the GED test, and participated in the graduation of 1990. He also obtained his U.S. citizenship through the INS-LAUSD Adult School Citizenship program.

Since he was so eager to learn English, Mr. Rodriguez decided to ask the school coordinator to give him a job as a parking lot attendant. He felt he needed to practice English more. In his day job nobody spoke English to him, but broken Spanish to insult him when more production was needed or when the sweatshop owner did not want to pay over-time. After a teacher's assistant left her position in the Reading Lab, Mr Rodriguez applied for the position and after being interviewed got hired. He always held two or more jobs to help to support his family in Mexico and pay for his college education.

After working in the classroom for a couple months, Jan Brittain, the new principal at Jefferson, asked him to help them with SIS. He was also trained and approved by the INS and the LAUSD Adult School Division to run mock interviews, fingerprint, and photograph citizenship aspirants attending the various adult school campuses. While he enjoyed tutoring the students and helping in the school's different offices, it was very satisfying for him to help applicants to fill out their INS forms for free. There was a sense of social justice. Private agencies were charging these people for the same service from $50:00 to $1000.00 dollars. It was very rewarding to help his community that way.

In the beginning of this journey, three of his brothers also joined him in the Adult School programs. Benito learned English and moved to Georgia with his family. Delfino learned English, obtained his GED, and graduated from Cal State LA in Child Development. He has worked for different adult schools and is currently working at Venice CAS as computers, and GED Spanish preparation class teacher. In addition, he is a teacher at the East LA Dakota Children's Center. He supports his own family and helps Mr. Rodriguez support his relatives in Mexico.

Francisco, his third brother, learned English, passed his GED, and had just obtained his California Assistant Pharmacy Technician Credential from Cerritos College when a stray bullet from gangs fighting on the streets of LA struck him in the head leaving him paralyzed and without the ability to talk. He was about to transfer to Cal Poly Pomona to continue his career as Pharmacist.

All of the brothers have contributed to the betterment of their relatives in Mexico and to their own thanks to the Adult School Division. At this time, Mr. Rodriguez is working on a Masters Degree in School Administration from Cal State LA. He lives with his wife Alejandra and his three-year-old child, and they are expecting their second baby in June 2005.

Since working for the Adult School Division, Mr. Rodriguez has been able to change the lives of many young people and adults by helping them to get their High School diplomas, learn English, and obtain their citizenship. He has also assisted them to solve many personal and community problems, in a very professional way. He is proud to work for the LAUSD/DACE adult education program. It is a program where students who have dropped out of their regular high schools get a second chance to obtain their high school diploma. At LAUSD/DACE they get a chance to believe in education.