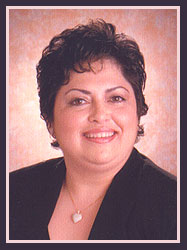 Claudia Rodriguez was born and raised in Mexico City. She attended high school in Mexico, and learned English on a scholarship at a private school. Looking for a better life and the ability to learn more English she decided to come to the United States after graduating. "I had just turned eighteen years old when I left home in September of 1987."

"Once here, I had to work to support myself," she continues, "My first job was working in a factory assembling electronic switches. I earned $3.75 an hour." After two years, the factory laid her off and she had to rely on her other job as a part-time, minimum wage cashier at a fast food restaurant. Later, she found work as a secretary at an immigration consultation office where she worked for three more years for a few cents above minimum wage.

"Realizing that my horizons would never broaden, and that my chances of getting a better job would not increase without an education, I saved some money and quit my two jobs. I took the GED and attended the adult school from 8:00 a.m. until 3:00 p.m. and from 6:00 p.m. until 9:00 p.m. After just four months of hard work, I received my high school diploma in May of 1993. This was the first step that I took that changed my future and enhanced my life."

Getting the basics out of the way, Claudia then enrolled in a community college where she also worked as a student aide. In January 1996, she graduated with an Associates Degree in Liberal Arts and transferred to Cal State Dominguez Hills where she earned a Bachelor's Degree in Business Administration in 1998. Claudia remained at Dominguez Hills earning a Master's in Behavioral Science in May 2000.

While a student at the university, Claudia had a job in the Chicano Studies Department. She started as a student aide, and then later became an Administrative Assistant. It was then that she decided to pursue a law degree. "The main reason to attend law school," she says, "was the compelling desire of serving people in need. I began my law studies in 2001 at Whittier Law School. While studying at Whittier , I had the opportunity to work as an extern in a public interest law organization. I chose to serve at San Pedro Community Legal Services (SPCLS), an organization that assists victims of domestic violence, mostly women, with legal issues in immigration and family law. I decided to volunteer my services for three consecutive semesters at SPCLS because I derived great satisfaction from the work that I performed. I saw all the good that one person can do in another person's life, especially those who have greatly suffered physical and/or psychological abuse."

In December 2004, Claudia received her Juris Doctor degree. The journey through law school had not been an easy one. "The program was very different from any academic experience I had before," she says, "but I was determined to graduate, and I kept working hard towards reaching my goal."

About her adult education experience Claudia says, "Adult education contributed to my current success because it gave me the tools and discipline to succeed in an American school, an educational system that was very different from the system that I was used to. Adult education also gave me the opportunity to work at my desired pace towards my high school diploma. I was the first in my family to get a college education and I feel proud to have been an example of discipline and tenacity for my younger brother and sister. My whole family is a ‘product' of the adult education system. My sister also attended and earned a high school diploma from the adult school. She recently earned a Baccalaureate degree. My brother took computer classes in the adult school in the evenings after his high school classes. He also recently earned a Baccalaureate degree. Finally, my mother has been an ESL student in the adult school since 1997.

"I am presently studying to take the July 2005 BAR exam. As for my plans for the future, I intend on working for an international organization that focuses on human rights, or for a political organization. I also plan on teaching at a community college or university to help students achieve their graduate degrees. I want to let young and adult students know that achieving a graduate degree is possible. I was not born in the United States and English is not my first language; however, I worked hard and achieved my goals. I feel proud to say that I broke several stereotypes about adult students, especially adult Latino students. I am proud to say that I overcame language, ethnic, and economic barriers. I hope to accomplish what my sister once said to me, ‘keep aiming high and reaching for the stars, and others will follow.'"