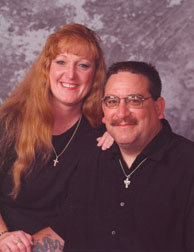 Les and Linda Martinez came to Merced Adult School in February of 1989 hoping to complete their high school diplomas. Linda had dropped out of high school halfway through the 9th grade. The couple realized that in order to have a more fulfilling life as husband and wife, they would need education to help them obtain a brighter future, so they decided to do it together.

Linda had already completed a CNA program, but needed a high school diploma to keep from losing her certification, so she enrolled in the High School Diploma program at Merced Adult School. She began working in the emergency room at a local hospital while continuing to take classes at the adult school and was told she would need an EMT license. She enrolled in the program at Merced College. Through all this, Linda was their two children while Les was in Arizona looking for employment. She was also working two jobs, one full-time and one part-time. She wanted to be a good and consistent role model to her children to whom she emphasized the importance of education. She successfully completed her High School Diploma requirements and graduated in June 1992.

Les wanted to earn his High School Diploma as well, but county rules required him to switch to GED. It took him only eight months to successfully complete the program, graduating in June 1990. Though things were looking up for the Martinez’, Les wasn’t able find work in Merced. In hopes of finding work, he went to Arizona, leaving behind Linda and the children. He was gone for a little over six months while Linda continued to pursue her educational programs, work, and maintain the household.

When Les and Linda enrolled in Merced Adult School they were in the GAIN Program. Flexibility and open-entry/exit drew them to the adult school. The flexible scheduled with varied class times helped them with issues such as childcare, transportation, and individual needs and learning styles. When Les went to Arizona to find work, Linda was able to attend school at night so she could be with the children during the day, and the flexible schedule allowed her to care for her ailing mother.

Linda says that her children were her greatest inspiration, and encouragement and patience of the teacher and aide helped to keep her motivated. She was the guest speaker at her graduation ceremony in June 1992 and, she still has her speech, tassel and ribbon. She counts graduation as one of her greatest accomplishments in life. Les and Linda talk freely about the significant role that, not only education, but also faith has played in their success. They both strongly believe that it has been "our faith in Christ that has carried us through some of the most difficult times" and has helped them to persevere and complete their education.

Les and Linda entered Merced Adult School as a couple and have worked together for 27 years, through some very difficult times, to achieve their shared goals. When one needed support, encouragement, love, patience and understanding, the other one was there to give what was needed. This has sustained them well past their graduation from Merced Adult School. The staff saw it in the classroom, heard it in their communication and now has witnessed the resulting success of this wonderful couple.