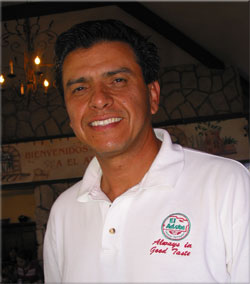 Life is very different for Victor Lopez today than it was in 1961, when he came to Bakersfield, California, at the age of 16. Sitting in a quiet corner of his restaurant, he recalled what it was like for him when he was growing up. "Both my father and my grandfather worked in the fields. Also many of my bothers and sisters were in the fields," recalls Victor about his family life, which was far from ideal. "My grandfather was my foundation and inspiration. Somehow we were able to come to the U. S. so we could get ahead and have a better life."

When he first arrived, like other Mexicans, Victor got work in the fields. "I was very happy in the fields," says Victor, until he realized he wanted more in life than he could have if he didn't make a change. He came to the Bakersfield Adult School (BAS) to learn English. "English classes were most important to me," says Victor, "The language barrier is the number one problem for people who come to America from Mexico like I did. I think once you have that (the ability to speak, read and write English) everything else can be handled."

At age 20, Victor made two major decisions in his life that decided his future path: he would go to school and he would be a good father. His growing up years were difficult and he wanted to be sure he would be a better father for his children than his own father had been for him.

Victor's life was very hectic during his time at BAS; he was working in the fields, training as a boxer, and going to school. "This time was most challenging for me. I had a full schedule every day. Between 5 a.m. and 11 p.m., I was either training as a boxer at the local gym, in the fields working, working at a local restaurant as a busboy, or going to school," Victor recalls. It was difficult to do all these things, but each activity helped achieve a goal he set for himself. "I look for challenges in my life, and I really like having structure in my life. I realize that discipline and hard work are the keys to success in anything you do. I remember that learning to speak English at the Adult School gave me confidence in everything else I was doing in life. It really raised my self–esteem."

"BAS was twenty years ago," says Victor, "I have memories of the positive experience I had at school, but it's hard to remember specific people. I do remember and thank Sandra Paz, who encouraged me all along to stay in school and not give up." He and Sandra, who has her own success story on this website, were students together in Mr. Charles Pilley's ESL class, and worked together at a local restaurant. "She would say, ‘Come on, Victor, if I can do it you can do it, to,’ whenever I became discouraged or tired from my long days."

Following graduation, Victor continued working in restaurants. There were many times when he wondered if restaurant life was for him. "It was very hard at first. Everything was so new to me. But I worked my way up from busboy to being a waiter." It was while working at El Torito, a Mexican restaurant chain, that Victor decided he wanted to change from being a waiter to going into management. "The manager at El Torito asked me why I wanted to do that. I was making excellent tip money waiting on tables. I was good at being a waiter, and I really liked it. He told me I would not be making as much money in management as I was making as a waiter. I understood that, but I saw that being a manager would give me better future opportunities. I was willing to give up some of the money to move forward. Also, I wanted to take advantage of the training I could get through El Torito, which provided management classes for their managers."

This decision added more challenges to Victor, and caused him to revise his thinking. Because of his heavier work schedule, he was not able to keep up with the high school diploma classes. However, rather than quit altogether, he pursued his GED, instead.

In 1990, Victor decided it was time to go out on his own by opening his own restaurant, El Adobe. "Restaurants are the hardest kind of business to get off the ground. Banks don't want to lend you money without a lot of red tape. However, we were able to start up, and we've been here for 14 years," says Victor. "BAS gave me the English and other academic knowledge I needed, and EL Torito gave me the experience to manage a restaurant successfully, so I feel really blessed and very lucky to have these chances in my life. I believe in doing best in whatever you do and sooner or later you will be recognized."

On November 20, 2004, Victor was the keynote speaker at the annual Out–of–School Youth Conference at California State University, Bakersfield. During his remarks he talked about how important education is to a person's success in life.

Victor is successful in his life because he's established short and long term goals for himself and he has achieved them. He feels "very blessed" because he has been able to make a success of his business, have a wonderful family, and be a good father to his children. "Because Bakersfield Adult School had classes at night it was possible for me to achieve my goals of learning English and getting my GED. This, together with the training I received in restaurant management, made my success as a restaurant owner possible," concludes Victor.