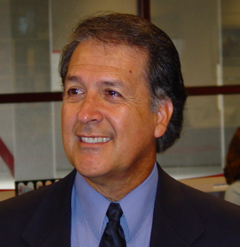 Jaime Mercado was born in Guadalajara, Mexico. At age 11 he moved to San Ysidro, CA with his family. He attended Southwest Junior High School and Mar Vista High School in the Sweetwater Union High School District.

During high school, Jaime was successful academically, but he dropped out of high school in the tenth grade to help his family financially. Jaime felt bad about quitting school, and his life was bleak, but he jumped at the chance to go to work. Jaime and four of his friends from San Ysidro made a pact to finish school, but only Jaime got his diploma. After working at several jobs, he realized the value of education and returned to school during the evening at Mar Vista Adult School.

Jaime came to appreciate that in adult education you never use up all of your chances. He slept through much of his first month at Mar Visa Adult School, being tired from this daytime job. One of his teachers, Burk Mills, became Jaime's mentor. Mr. Mills encouraged Jaime to take personal responsibility for his education and gave him much needed attention and direction. He describes Mr. Mills as low key and compassionate yet strict with high expectations of his students.

Jaime received his high school diploma through the adult school, but he left with more than that. He now had an objective to become a teacher, and he had a mission to help young people improve their lives through education. He attended Southwestern Community College and then transferred to San Diego State University, where he earned his teaching and administrative credentials.

After completing his education, Jaime found it difficult to find a teaching position, but a farsighted principal squeezed him into a combination industrial arts and Spanish assignment. After success at a teacher, Jaime was recommended for a Carnegie Institute Fellowship in School Administration.

Jaime’s life goal has been to positively influence the lives of young people, and he has been very successful. He became the principal at Mar Vista High School, the school he dropped out of years earlier. It was quite a shock to the teachers who remembered him as a student! But his convictions eventually lead him to Palomar Continuation High School where he felt he could do even more good.

Jaime now has gone full circle and is the Principal of National City Adult School. He is back to the system that gave him his jumpstart. Now he is enabling hundreds of students to take personal responsibility for their own educations.