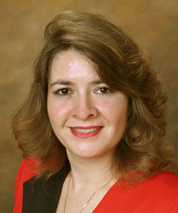 As a young child, Guadalupe Jimenez had a drive to succeed, to be the best at everything she did and to learn all she could. Her best teacher was her mother, Maura Jimenez. Like so many in the northern border city of Tijuana, Mexico, Maura was very poor. She was a good mother, and wanted Lupe to have the best, but there was no money to afford the education her daughter could only dream of.

"Lupe, I will help you get a vocational scholarship which in turn will support your university studies in the future," she told a disappointed Lupe one day, "I don't think going to secundaria (grades 7-9 in the U.S.) at this point is the right choice, because after secundaria, who is going to pay your high school expenses? You could easily end up with nothing." Maura's wise words became engraved in Lupe's mind. Hearing the wisdom of her mother, and understanding the possibility of not going to high school, Lupe decided to attend vocational school.

Lupe's potential for great accomplishments did not go unnoticed by Aldegundo Jimenez and Gerardo Nunez, two of her elementary teachers in Tijuana. They knew the value and importance of education and instilled this same love in Lupe. Hearing of her mother's decision, both teachers offered to pay all of Lupe's school expenses, and even though she didn't go to secundaria, Mr. Jimenez and Mr. Ruiz had set her dreams in motion. To this day Lupe remembers their wonderful inspiration and their strong support.

Time proved the truth of Maura's words. Lupe received her Bilingual Secretary Diploma from the Instituto Tecnico Comercial Juarez in Tijuana in 1982. The vocational training as a Bilingual Secretary helped her support herself all the way to her real dream of attending the University.

In 1984 Lupe moved to the United States permanently. She immediately began studying English at Sweetwater Adult School near San Diego until April of 1985. It was there she met Gus Valdez, another teacher who, not only inspired her, but also helped her get established in her new country Lupe credits Mr. Valdez with, "teaching me the cements of conjugating verbs. Thanks to that knowledge it became easier and faster for me to learn the English language". Aware that Lupe was a guest of local family and had no income, Gus gave Lupe her first American job as his twice a month housekeeper. His generosity relieved her from financial worries. "I will always appreciate his consideration and care," says Lupe.

Lupe had to overcome the language barrier, transportation, and physical exhaustion caused by both her workload and her drive for education. She was living on an isolated ranch with no access to transportation, and had to rely on relatives, classmates, and when necessary, her bicycle to go back and forth to school. Her first job was in the fields picking grapes. Up at four in the morning, she prepared her food for the day and left for the fields, returning home ten hours later with little time left for relaxation or entertainment. Her strong determination and love of learning pushed her to pursue her dream and get a better job.

In 1986, Lupe enrolled in English as a Second Language and GED classes at Coachella Valley Adult School. After receiving her GED she continued her training in general office skills and computer programs at the Center for Employment Training in Indio, California. It was there that she met another inspirational teacher, William Duffy. An excellent and creative computer teacher, Mr. Duffy was Lupe's mentor, and gave her the confidence to believe in herself and the inspiration to continue to develop her skills.

Then, in 1987, Lupe began a career with Ambitron Computer Technology, a vocational school specializing in vocational preparation. She began as an Office Manager, and a year later became a certificated instructor at Ambitron. Among other things, she taught ESL and aided in teaching computer applications. In 1993 she became the Assistant Director.

Lupe became a U.S. citizen in 1996 while working for the Coachella Valley Adult School in 1996. She had returned to Coachella Valley as a vocational education teacher. She specializes in teaching general office skills, manual and computerized bookkeeping, and computer skills. Because of the large Spanish speaking population in the area, she translates and provides training to Spanish speaking students.

Lupe contributes time and energy, and lends her expertise outside the classroom as well. She is an active member of the Coachella Valley Teachers Union serving as Treasurer and Site Representative.

Adult education was the first of many doors that allowed Lupe to achieve success in business and education. Adult education enabled Lupe to pursue higher education, achieve her life goals, and pursue her love for helping other students improve their lives through education. This is her focus. Lupe understands that adult students have many competing responsibilities that must be carefully dealt with as they progress toward their own goals. Offering strong guidance and instruction, Lupe feels she can make a difference each time her students attend class. Lupe is a strong role model for her vocational students. "I will encourage them to keep pursuing their education," she promises, "I will do my utmost to help the student to accomplish the daily class objectives, but my biggest contribution will be to never give up on any of them because I want them to sense the feeling of success that I am currently experiencing." As Lupe continues along her career path her newest goal is to become a school principal.