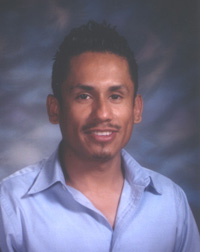 Ulises came to Monrovia Adult School for the first time in 1991. He was trying to make up classes to fulfill his graduation requirements at our local high school. He was eighteen at the time and had brought a bunch of high school friends with him. It was not long before they all got into trouble for talking and messing around. Ulises was young, immature and thought he knew it all, but he did not last long at the adult school.

The next year Ulises appeared at the adult school again. This time he came as an adult student. He was very polite, but still very unfocused. He attended school for about a month, and then he disappeared. This cycle of coming and going went on for about four more years. Then, in September of 2003, Ulises walked through the door once more. He was filled with a new enthusiasm and determination that was quite evident. He was enrolled to take his last two classes to complete his high school graduation requirements.

At this time, Ulises revealed to his teacher that there was a good reason that for the past five years he had attended school for a short while and then dropped out. Ulises was fighting a drug addiction and was on the losing end. Deep in his heart, all those years, he yearned to get his diploma, but just couldn’t pull himself together to do so. But thankfully, through his church, he found the Teen Challenge drug outreach program. He was in rehab for eleven months. During those months he found God, himself, and the strength to defeat his drug addiction demons. He emerged a new person full of fire and determination. Thus, when he started school in September 2003, he finally had the focus and commitment that had been missing all those years.

From September through November, he attended school to work on his economics and English Literature classes. He was a joy to have around with his boundless eagerness to learn. He came to writing workshops and proved to be quite an eloquent writer. He volunteered around campus at various functions. He was one of the lead students at the adult school’s yearly Student Showcase, where he gave visiting prospective students a tour of the class and answered any questions they had. He proved an excellent guide and is a strong proponent of the adult school in general. By November, he had completed all his courses to get his high school diploma.

Ulises then immediately enrolled at the Latin American Bible Institute. After his first semester, he had a 4.0 average and was first in his class. He would stop by the adult school from time to time to visit and let his teachers know how he was progressing. As June approached and graduation ceremonies at Monrovia Adult School were near, it was clear to all the academic staff which student would be awarded the Monrovia Rotary Scholarship. The Rotary scholarship is the highest award one can get from the adult school. Ulises gave a wonderful acceptance speech at the Rotary banquet. He thanked Monrovia Adult School for the encouragement and support he had received all those years. He praised the staff for the acceptance they continually gave him that kept him coming back, even when he was not ready himself.

Ulises is now in his second year of Bible college. He is still at the top of his class with a 4.0 grade point average. His next goal is to go study theology at Fuller Seminary, so he can become a minister. With his dynamic presence and speaking ability, this is truly the right vocation for him. He has already spoken several times locally at his church, Monrovia High School, and many other venues to share his story and journey. He is a wonderful young man with a heart full of love and giving. He has truly turned his life around.