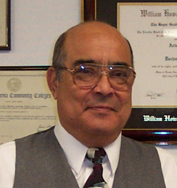 Arturo took an E.S.L. class for only two months to master his English skills. He has fond memories of his teacher Mrs. Darlene Henke, who Arturo credits for helping him greatly. The next step for Arturo was to take an Adult High School Diploma class. His principal, Robert Randall, encouraged him to finish school. Arturo finished his studies at Chula Vista Adult High School, and graduated with an Adult High School Diploma. Arturo explained that the adult diploma was the only option he had to finish high school early, and join the military.

Arturo Santoyo served in the Air Force for four years and is a Vietnam Veteran. His military service entitled Arturo to go to college on the GI Bill, which helped a lot with college expenses.

Arturo's college and credentials are great accomplishments. He received his B.A. (1972) and Masters in Counseling (1973) from Inter-American University of Puerto Rico. He attended San Diego State University in 1976 for graduate studies in Adult Education. In 1978, he attended Point Loma College, and finished his graduate studies in school administration. Dr. Arturo Santoyo completed his Doctoral field courses at Northern Arizona University in 1979. The emphasis was in Curriculum and Instruction. In 1985, Arturo attended The University of San Diego where he received his special education credentials with the emphasis in Severe Handicapped and also Severe Emotionally Disturbed. In 2003, he obtained his Ed.D. in School Administration at William Howard Taft University.

Arturo Santoyo is currently the Director of Adult Education at Central Union High School District. He has worked well in putting school sites in the community. These programs include E.S.L., A.B.E., Adult High School Diploma, Parenting, Citizenship, GED, Security Guard Training, School Bus Driver Training, Cooking classes, and other vocational areas. He provides adult education classes for thousands of students and students and staff consider him a mentor and friend. Arturo said, "I advise the students according to my life experiences." I have seen Santoyo motivate students by showing them his Adult High School Diploma. What more motivation do students need?

Dr. Santoyo said he would be retiring by 2006 to spend time with his family, travel the world, and maybe even write a few books.