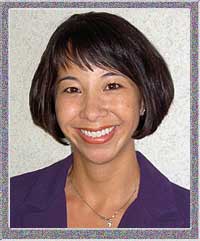 When Melissa Lee graduated from Bonita High School in 1987 she was like many high school graduates, having no plan or direction for her life. It took what is described as a life altering experience, the birth of her son Ryan in 1996, to put Melissa on course to a successful future and a promising career. Ryan was just five months old when Melissa gave in to the repeated enticements, in the form of a brochure, sent to her home by Tri-Community Adult Education. She enrolled in the school's court reporting program with an ambitious plan of completing the classes and passing the state exam before Ryan entered kindergarten. It was June 1996.

School wasn't going to be easy. To make ends meet, Melissa worked weekends as a waitress, but it wasn't enough. Her status as a student and single mother qualified her for assistance through the Cal-Works program. "Being on state aid and waiting tables at my age was nothing I was eager to share," says Melissa, but she is very thankful for the AFDC and Cal-Works programs that helped her during some tough times. She also had a supportive family. They helped look after Ryan while Melissa attended classes in the first two years. When Ryan turned two, she enrolled him in on-site child care at school.

"Being a single parent with a young child would have made it impossible for me to attend school without the child care facilities offered at the school," says Melissa. "Not only was it affordable ($2 per full day), but the staff created a safe, fun, loving atmosphere where my son learned as much, if not more, than in a regular preschool facility.  It was a God send." Tri-Community's excellent childcare program "gave Ryan the confidence and security which is an essential base for success in all aspects of life." It helped Melissa to be able to successfully complete the court reporting program in the time she wanted. " It would have taken me twice as long, if not longer, to finish school had I only been able to attend part time."

Court Reporters have to meet very rigorous education requirements. Melissa came to school in the morning, stayed through the afternoon, and often classes lasted into the night. Support from family and encouragement from school staff, including the child care staff, was crucial in keeping Melissa focused on her goal of completing this challenging program. Courses in English were one thing, but Melissa was also required to complete courses in legal and medical terminology, transcript preparation, and she had to complete an internship and technology requirement. The most challenging part of the program is to be able to take notes and transcribe a live four-voice court or deposition proceeding at 200 words per minute with an accuracy rate of 95 percent. Completing all these requirements qualified her for the state exam in January 2001, which she passed that June on her very first attempt. Her goal of finishing before Ryan started kindergarten met, Melissa was now ready to take on more challenges.

The challenges didn't waste time arriving. Immediately after passing the test, Melissa started working for Jonnell Agnew and Associates, Certified Court Reporters in Pasadena. She is still employed there full time, and is now able to support herself and her son without the state assistance she once depended on.

Melissa sums up her Adult Education experience this way.

"I could go on and on, but the bottom line is, I absolutely would not and could not be where I am today if it weren't for the program at Tri-Community and all the people and benefits involved with it. I knew, when I opened up the brochure that they randomly sent out to my address, that it was a God send, and the more I became involved, the better it got. Although it wasn't easy, I was able to complete the program in the time frame I had given myself (when my son began kindergarten) and passed my state exam on the very first attempt.

"The affordability of the school was a huge factor as well. Being able to begin my career debt free, without massive student loans to pay back, was definitely a blessing, and definitely not the norm for most people when they get out of school.

"I am now a very steadily working certified shorthand reporter for the State of California. I have much more than a job now; I have a career. I am not only making great money, having plenty of work, but I have a career I am proud of. And now, when I tell people I am a court reporter, I say it with confidence and pride."