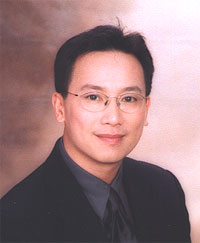 With his parents and older brother, eighteen year old Chanh Quang Pham arrived in San Francisco on May 5, 1990. Coming from Vietnam as refugees, they spent their first four months in their new country surviving on welfare until Chanh found work as an assembler. His real dream, his goal, was to pursue higher education, so he enrolled in ESL classes at City College of San Francisco's Downtown campus that summer. His first step toward higher education would involve improving the English he had learned, but had little opportunity to practice, as a 6th grader in Vietnam.

The following year, Chanh transferred out of the non-credit program and entered a credit program at the Ocean Campus. Cost could have been an issue, but the Extended Opportunity Program supplied financial assistance while he worked as a student helper for the ESL program coordinator. He continued at City College of San Francisco for the next two years, adding other classes and majoring in Mathematics and Computer Science.

After finishing his program at City College, Chanh enrolled in the University of California, Berkeley for the Fall 1993 term. Changing his major from Mathematics to Computer Science, he graduated in the Spring of 1996 and went to work for Sun Microsystems as a software engineer in January 1997. Chanh was being recruited by several potential employers, but settled on Sun where he still works today. He also enrolled in San Francisco State University's MBA program, earning a degree in 2002.

Chanh had realized his goal of higher education, but not without facing some tough challenges. Even though Chanh had learned English as a young boy in Vietnam, he struggled with it daily. Describing himself as "shy," he didn't always have the confidence to ask for help. College lectures were often "hard to understand" for Chanh, and reading college textbooks was an even greater challenge. His strong desire to do well and succeed in college overrode his shyness as he disciplined himself to improve his English skills every chance he got. He even went so far as to listen to audio English lessons as he fell asleep at night.

As if working and going to school were not enough, Chanh was also active in the Vietnamese community. He started his own sid business and broadcasts a Vietnamese TV program for an hour each day. He also produces various concerts, talk shows, and fashion shows to the Vietnamese community. The people of Vietnam benefit greatly from Chanh's generosity as he sponsors fundraising activities to raise awareness and money for the people of his native country.

Chanh proudly admits that he would not be where he is today without the help of San Francisco City College and the ESL program. Learning English moved him from a menial job and welfare dependence four short months after his arrival in the U.S. His advice to others pursuing their goals through adult education is to be "determined about reaching your goals," and make reaching them your "highest priority."