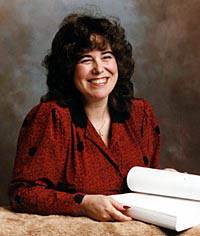 Maria Oliveira's educational background began at age 7 in the Azores Islands. She came to the United States as a 19-year-old Portuguese immigrant. From 1977-1979 she attended the Fairfield- Suisun Adult School for which she attributes much of her professional success. Today, she owns and directs her own language-consulting firm, Maria Oliveira Language Consulting Service.

Going to school every day was not easy. Maria was married with two small children, so she felt she needed to "go faster". When she got up enough courage, Maria continued with other educational endeavors.

While she was at the Fairfield- Suisun Adult School, Maria took many Business courses - including Typing, Bookkeeping, and Office Training. These business classes provided the foundation core when Maria started her own business years later. In fact, she says the accounting skills she learned then are still a big help today with her growing language-consulting firm.

Maria attributes the supportive, encouraging teachers at the Adult School giving her the incentive to continue her education. Linda Ade, the present Assistant Principal of the Adult School, was her English teacher then. Maria says, "She was very helpful then, and still is!" The Adult School today still strives to make a personal connection with every student, guiding them in their life-long learning.

She transferred to Martinez Adult School to "work at her own pace" and earned a high school diploma within a year. Enrolling in a community college in 1982 she completed degrees in Spanish and in Psychology. Three years later, Maria Oliveira graduated from California State University, Sacramento, with a B.A. in Spanish and a special major in Portuguese. In Madrid, Spain, she continued her linguistic and cultural studies. In 1986, Maria received her M.A. from Sacramento State. She later returned to the university to acquire 36 more units in education. Obtaining her Masters of Arts degree opened more doors for Maria, and she received her Community College Instructor Credential in 1989.

After earning several degrees and credentials, Maria Oliveira came back to the Fairfield- Suisun Adult School in 1993 to teach in the Community Education Program. She created and taught an innovative PALS program (Partners Acquiring Language Skills"). In this class, native speakers of English and Spanish were partners in helping one another improve in the language they are learning. Presently, Maria teaches very popular Conversational Spanish classes at the Adult School to groups of students who say they "love the class, because Maria loves to teach."

Today, Maria owns and directs her own language consulting Ling firm. Maria teaches, translates, and as a language program specialist, she develops conversational and technical educational materials which consist of audiotapes and workbooks in Spanish and Portuguese. Being a most enthusiastic instructor who loves teaching, Maria makes sure that her students learn. While they are learning, they enjoy and gain an appreciation for the language and the culture in a safe and warm learning environment.

Maria's educational philosophy is that one must work hard and be persistent. She says, "Education is life itself. Acquiring knowledge through formal education has become the most important thing in my life. It has enhanced my living and made all my achievements possible."