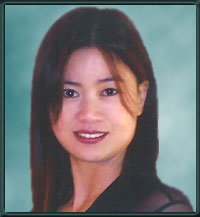 Joanne Li Cheng arrived in San Francisco in the summer of 1994 with little money, no family, no English, and little hope. She found a job busing tables at a Chinese restaurant because it didn't require her to speak English, but it didn't allow her the opportunity to learn English either. Joanne soon found out that some of her co-workers were studying at the Chinatown/North Beach Campus of the City College of San Francisco.

Apprehensive at first, Joanne was encouraged by the counseling and enrollment staff at the college who went out of their way to make her feel welcome. They understood that many students were also working full-time and had tailored programs to fit the students' schedules. They helped Joanne map out a plan for her future and she ended up studying there for more than two years.

Joanne always strived to better herself and switched to the credit program at the main City College campus, and might have stayed there except for the success she began to find in the business world. She quit the restaurant and started working the counter at a fast food restaurant, until she finally found a job working for a cell phone company doing inventory. Two years of inventory work gave Joanne no opportunity to speak English. The best she could do was listen to Customer Service representatives answering phones and speaking to clients in both English and Chinese.

In 1997, Joanne tried to get a job in a start-up business that one of her teacher's had begun, but her English wasn't good enough. Rather than get discouraged, she came back and tried again three years later, and started out being trained as a bookkeeper. But history repeated itself and six months later she started picking up the phones and answering clients' questions. She was so successful that she started doing sales by 2001 and was promoted to office manager in 2002.

This year, 2004, has been the culmination of many dreams for Joanne. First, she bought the business from her teacher and has increased sales and profits dramatically since taking the reins. Second, she was proud to be asked by the school to come speak to the evaluators of the MetLife Excellence Award and even more proud to go to the press conference when the school won the award. When asked to speak to a class of students at the Chinatown/North Beach Campus, Joanne truly tried to encourage them with her story, a series of stepping stones of accomplishments.