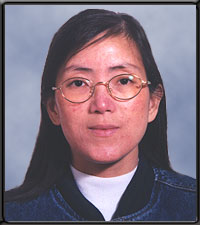 Yuk Tai Tsang and her family emigrated from Hong Kong on July 4, 1994. Over the next five years Yuk Tai took an incredible journey through noncredit ESL classes and college credit programs to reach her goal of a college education. In June 1999 Yuk Tai reached that goal by earning her first Associate's Degree. She continued in school and earned a second Associate's Degree in June 2000. Sue Lim Yee, a counselor at City College of San Francisco tells Yuk Tai's inspiring story.

"When I first met Yuk Tai Tsang in my office for assessment, she held a baby in her arms and had a young boy by her side. Her English was very limited and her Chinese education was limited to middle school because she had to work and help support the family. Despite this background, she said that she wanted to be a doctor. (I later found out that she had lupus and this personal health experience underlined her desire to study medicine.)

"When Yuk Tai left my office, I knew that she was going to be a very serious student but I wondered how she would be able to achieve her aspirations of being a doctor. Although she had a youthful appearance and lots of enthusiasm, she was 32 years old, educated only at a middle school level in her own country, assessed at Beginning Low ESL 1, a new immigrant facing adjustment and survival issues, and a parent of two young children. However, she seemed quite determined, very motivated and full of optimism. She also had a warm friendly personality which exuded confidence in taking on challenges

"Yuk Tai indeed proved to be a very good student, who studied diligently and ended up on an "accelerated" path. She did so well that her ESL I teacher recommended that she skip level 2 and go directly into ESL 3. At the end of this second semester, the same recommendation was made: skip ESL 4 and go directly to an ESL 5/6 Intensive class.

"Yuk Tai also pursued education beyond the classroom walls – she became active in the Associated Student Council at our campus and served one year as the president. She was also the chairperson for the Parents Committee at her son's elementary school. These activities provided opportunities not only in leadership and community service but also in using English, participating in the democratic process, networking with others, and learning more about the United States and its cultural milieu. With this experience, our campus was able to subsequently hire her as a mentor for other student council officers.

"After achieving an intermediate low ESL 5 in non credit and establishing California residency, Yuk Tai was ready to transition to the credit program of our college. She took the credit placement tests and was assessed at the intermediate credit level of ESL 42. The credit limits from these "remedial level ESL classes" did not count toward graduation but did allow Yuk Tai to receive financial aid and apply for work study positions. While taking her credit classes as a full-time student at the Downtown Campus, Yuk Tai returned to our campus to work fifteen hours a week in the counseling office, and later in the admissions office. Her work schedule revolved around her school schedule and the needs of her children.

"Yuk Tai now had to balance not only studies and family but also a job. Since the children were no longer attending programs in Chinatown, her typical day started with getting her son on a school bus then taking the younger daughter on a public bus to a childcare center. With her two children in school, Yuk Tai could now take the buses to attend her classes, which were now at the Ocean Campus — about an hour or more each way. At the end of her own day of school or work, Yuk Tai reversed the commute to pick up her daughter to go home.

"Once home, there would be snacks or perhaps an early dinner so that there would be time for homework, Yuk Tai would not do her own homework until the children were in bed. She had to be available to help them with their school work or do household chores. Sometimes Yuk Tai had to work evenings at our campus because of daytime conflicts with her classes or children's needs. Her own studies would often end past midnight, meaning that her sleep would not be a long one since she would have to get up by 6 a.m. to start the day's routine. I often told Yuk Tai's children that their mom was very special and she was working very hard to learn English. I said that they needed to do homework just like their mom and I told Yuk Tai that she was an incredible role model for her children and others. An Asian Coalition Scholarship was awarded to Yuk Tai in recognition of her academic endeavors, community service and leadership.

While an Associate's Degree might be the end goal for many students, Yuk Tai was not done with her education. She had pursued her dream of working in the medical field by applying for the Pharmacy Technician Program. However, the state required a high school diploma or a GED to be licensed. The program director was willing to accept Yuk Tai into the program with the stipulation that she have a GED by the end of the one-year program or she would be ineligible to work in the field.

"After failing her first attempt at the GED test, Yuk Tai attended a few sessions in the non-credit Transitional Studies Department at John Adams Campus and was able to pass the GED test during her first semester in the Pharmacy Technician Program. Shortly after graduating from this program, Yuk Tai was hired to work in the pharmacy department of a supermarket chain store for two months, then received a full-time permanent offer with a major drugstore where she has been employed for three years now. Her services as a Pharmacy Technician has gone beyond the regular duties and responsibilities of this position. Her language skills in different Chinese dialects and her bicultural experiences have been well appreciated by colleagues and customers.

"When I recently contacted Yuk Tai about being interviewed by our local newspaper for an article about "success stories of non­credit students', she did not hesitate in saying "yes". About a month later, our college was holding a press conference to announce the 2004 MetLife Award for Excellence and I was asked to invite Yuk Tai. Again, Yuk Tai did not hesitate with her response and used her "birthday time off" from work to attend this reception event, where she was interviewed for the Chinese media."

Yuk Tai has truly been an inspiration and her story is used regularly to encourage other immigrant students to pursue their dreams.