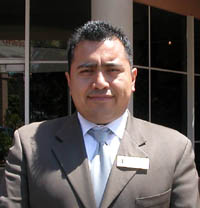 In 1991 Raphael Coll started taking ESL classes at the Educational Cultural complex of San Diego Community College. He brought with him an energy and enthusiasm for learning that was infectious to the other students. He started with the morning class, then joined the afternoon classes and even attended evening classes. He literally attended ESL and computer classes morning, noon, and night for about two years in the continuing Education program of San Diego Community Colleges.

Rafael was motivated; he didn’t speak a word of English when he immigrated to the United States in 1990. Rafael worked as a janitor for two years and realized that he could not get ahead without first leaning English. He quickly found a job as a houseman in a local hotel where he moved furniture and set-up banquets. Rafael had a dream to move up the career ladder in the hotel industry. Rafael also strongly believes in setting goals. He said, “Set a goal and make it happen. Then when you make that goal, set another goal.” Rafael clearly lives by his motto. He quickly became lead houseman, then a banquet server, and soon he was promoted to banquet captain. He then set his sights on becoming a banquet manager, which is his current position. His next goal is to be a Food and Beverage Manger. And after that he wants to be a General Manger of major hotel.

Rafael uses the skills he learned in his computer classes to accomplish his everyday work duties. He uses MS Excel to manage budgets, e-mail to communicate with other departments, and MS Word to write the occasional letter. He says the ESL and computer classes at the Educational Cultural complex of San Diego Community College were crucial to him feeling confident to take on the responsibilities as a supervisor and manager.

At a recent workshop for hospitality employees, Rafael graciously acknowledged the many people who have supported and championed him. He thanked his ESL instructors because, “You need to learn English to be successful in this industry.“ He encouraged the hotel workers in the audience to apply themselves to their English studies. He elaborated on language learning by saying, “Learning English does not mean giving up your culture.”