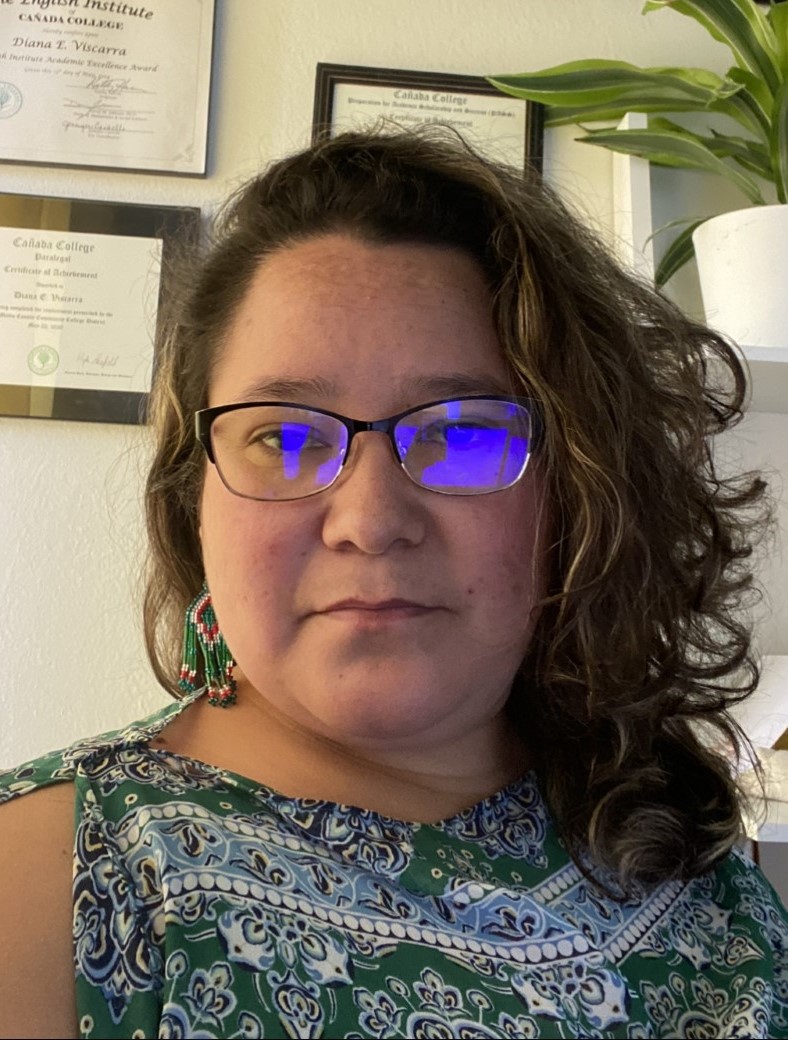 Diana Viscarra was born in San Francisco, California. However, when she was only eight months old, her father tragically died during a vacation to Mexico. Left alone with her six children and without a means of providing for them, Diana’s mother decided to stay in Mexico. At eighteen years of age, Diana made the very difficult decision to leave her family and everything she had ever known for the small possibility of being able to get an education in the United States. When Diana arrived in the United States, she was both excited and scared. She and her brother were alone without any guidance or support from family or friends. In the beginning, it was very difficult for both of them to find a job because they did not speak English and would survive on $5 per day that was divided between the two. However bleak things might have seemed, Diana was determined to go to get a job and go to school. Eventually finding a job in a retail store in San Francisco’s Mission District, she worked hard, taking on the night shifts from 11:00pm to 6:00am loading and unloading boxes at factories for a year. She then was able to get a job working at the San Francisco Airport in fast food restaurants where she got lots of experience in customer service but also working in many different places within the airport. She worked at the airport for more than seven years, always knowing she wanted to do more with her life.

During those seven years, she got married and had two daughters. It wasn't until she turned 25 and had her second daughter when she took advantage of her maternity leave that she finally decided to enroll at an adult school. In 2007, Diana moved to San Mateo County, where she decided to enroll at Sequoia Adult School. Her only goal at that time was to get her GED and learn English, thinking that with those items, she could be promoted within the fast-food restaurant where she worked. Higher education seemed impossible in her mind. She quickly started taking GED classes in Spanish; however, she had to take lots of breaks because of difficulties with childcare. It wasn't until she received a call from a staff member at Sequoia Adult School, who had taken notice of her attendance to ask her what it was he could do to help her achieve her goal, that really helped her to refocus her goals and allowed her to continue to feel motivated to keep trying and attend class. At 26 years old, after almost a year, she was finally able to get her GED.

After completing her GED, she knew she had to improve her English especially if she wanted to get promoted at work, and she used that as motivation to start her ESL journey at Sequoia Adult School. The Transition Advisor at Sequoia Adult School encouraged her to take an ESL placement test at Cañada College to see if she would qualify to take more advanced ESL classes. At Sequoia, they helped her throughout the whole enrollment process, and they guided her with applying for financial aid. It was the first time that she began to believe that higher education could be possible. Once she started, she did not stop. It took her three to four years to complete the English courses, but as soon as she completed them, she started taking courses to become a paralegal. In 2019, she graduated from Cañada College with an A.S. in Paralegal Studies, and in Spring 2020 she received an A.A. in Political Science. Having accomplished so much more than she ever thought possible at this point, she knew she could not stop. In Fall 2020, in the midst of the pandemic and facing an uncertain future with her husband now having lost his job, she started her journey towards a bachelor's degree in Political Science at San Francisco State University. This experience was so difficult for Diana because she had to navigate a totally new school system and take online university classes while sharing a study and workspace with her two children. Despite all of the challenges and difficulties, she persevered through it all and received a B.A in Political Science in May 2022!

With the help of so many people along the way, Diana has accomplished so much academically. It was because of these people who helped her and encouraged her that she is motivated to offer that same type of support to others in her community. Very early on her educational journey, despite her insecurities due to her limitations in the language, Diana began working part time as an assistant to the teachers who taught the lower ESL levels at Cañada College. She worked as an assistant for almost two years and during this time, she was also recruited by the college’s Learning Center to become an ESL Tutor. She once again was scared and unsure of the position because she felt she still did not know enough English to be tutoring others; however, when she expressed her concern, they told her that they were not looking for perfection, they were looking for experience. They wanted somebody who had gone through all the levels, somebody who other students could really look up to and connect with. After working both jobs for one semester, she decided to stay as a tutor for the next two years. Her success in tutoring served as a great motivator for her. She loved helping other students who were once where she was, and her hard work kept paying off because she was later invited to become a peer mentor. As a peer mentor, she helped students learn, gain new study skills, and manage their time, and she taught them strategies to reach their goals. She listened to them when they were stressed and helped guide them through their various struggles.

Sequoia Adult School provided Diana with a great starting point; they helped her not only with her college applications, but they also helped connect her with a private scholarship foundation called “Upward Scholars” which at the time was called “Sequoia Adult School Scholars.” Upward Scholars provides students transitioning from adult schools with money for books, transportation, laptops, and free tutoring services. As a recipient of the scholarship, Diana also spent many years volunteering for them. She helped them with private fundraising events, tutoring, and their ESL conversation clubs. She was constantly asked to deliver speeches about her life experiences to help motivate students. Finally in July 2019, she began working for Upward Scholars as a Student Fellow and was quickly promoted to Program Coordinator. In 2020, the program continued to grow, and she was promoted to full time and became the Programs Manager in 2021. Now in 2022, she serves as the Program Director. She is passionate about her job, as Upward Scholars has helped over 1,000 adult immigrant students in the San Mateo County area afford textbooks and provided them with countless hours of free tutoring. Her work with Upward Scholars has been instrumental in reaching a larger number of students as she worked hard in her goal of expanding the program.

At the beginning of her journey, Diana only wanted to go to school to learn English so that she could get a higher position within the food industry, but now Diana is looking to her future of pursuing a master's and a PhD. Diana hopes to continue helping her community and its students be able to afford books for college through her work with Upward Scholars as well helping undocumented students have a chance to go to school and achieve their goals through her volunteer work with the Immigration Institute of the Bay Area. She wants people to know that it's okay to feel scared, but that even if they are scared or insecure, they should never allow those fears to stop them from pursuing their dreams.