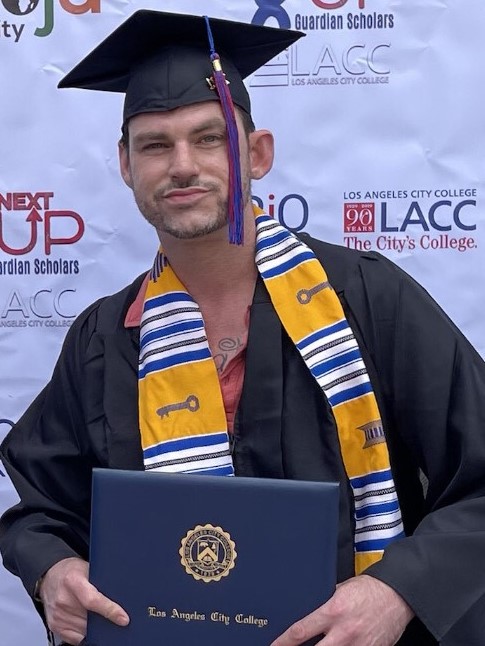 Here is my nominee's story through his own words.

Growing up in Las Vegas, I never had a positive influence to help guide me through education. My parents did not care if I succeeded at school or not. Looking back, I do not think they cared at all. I was never pushed to do great things as a child, and I remember always feeling as if I was just an inconvenience to my parents. I dropped out of school when I was just seventeen years old. The dean of my high school requested to have a parent conference with my mother, and my mother refused to go meet with the dean. I was forced to drop out because my mother refused to go to the meeting. I forgot about school after that and just went on with life. I do remember very strongly as a child I had a passion for Hollywood. I wanted to walk the red carpets like the movie stars. I wanted those flashing camera lights on me. Those desires always stayed with me.

I moved to Hollywood when I was 24 years old, and I met my husband, Johnathan. We fell in love and got married within a few months of knowing each other. We both knew it was true love and everything about our relationship was magical. During our time together, I was able to start working on that Hollywood dream. I was getting booked on all kinds of TV shows like Greek, Chuck, and Cold Case. I was starting to get lots of work until the writers went on strike. I ended up going into restaurant management. One day I received a call from my older brother Joe crying and he said my father had passed away. My father had gone to bed and never woke up. I was devastated and I started drinking heavily. One year later my husband Johnathan came home from work and the whites in his eyes were yellow. He went to Glendale Hospital and passed away in my arms 14 days later. We buried him on our seven-year anniversary. Just four months after Johnathan passed away, I received a phone call from my crying brother. He told me that my mother had just passed away. She had a heart attack and a stroke. I was in Los Angeles with no relatives or close friends near me. I am not lying when I tell you that my mind jumped out of my head and took off on the 101 freeway. I drowned myself in alcohol and drugs and took self-destruction to a whole new level.

After six solid years of self-destruction, I finally gave in. I called my older brother back in Las Vegas and asked for help. I left everything and went to a six-month rehab in Las Vegas through the Salvation Army. On my second month into rehab, my brother was going to come meet up with me at the rehab and attend chapel with me. He never showed up. I received messages through the internet that my brother took his own life. He hung himself in the closet of his condo. I almost left rehab just so I could drink. But, through prayer, I managed to stick it out. I graduated from the Salvation Army Rehabilitation Center on August 29, 2018, just one day after my 38th birthday.

I still had that childhood desire of being on a red carpet with flashing camera lights on me. I had nowhere to live though. I bought a plane ticket back to LA and I was homeless. I was staying in Skid Row and somehow, I ended up at the Job Center on Melrose right next to Los Angeles City College. I walked past the front gates of LACC on North Vermont Avenue. I had a strong desire to walk through those gates and check it out. I found myself in the welcome center filling out an application on the computer. I was told that I could work on my GED and start college courses at the same time. I would have to pass my GED first before I could get a degree. I was excited to see the program for TV/Film. I remember flipping a quarter and if it landed on heads then I was going to film school. If it landed on tails, I was not going to film school. It landed on heads.

I started up with Professor Larson. He welcomed me with open arms and made me feel so comfortable. I only stayed with him for four months before I started testing for my GED. I passed everything except for math. I never gave up though. It took me five times before I passed math and received my GED. I went on and continued my credit courses at LACC in the TV/Film program. I had the best time at LACC. I made the Dean's list three times and the President's list one time. I graduated with an associate degree in Cinema Production in June 2020. I also transferred over to California State University, Los Angeles. I am working on my BA in Television/Film & Media Studies with the option in Writing. I am due to graduate from CSULA in 2023. I plan on becoming one of the best screenwriters of our time. I have already started the process and submitted a Spec Script to Warner Brothers Studios. I was rejected though, but I took it with a huge smile. I received my very first rejection from Hollywood.

Thank you for taking the time to read my story.