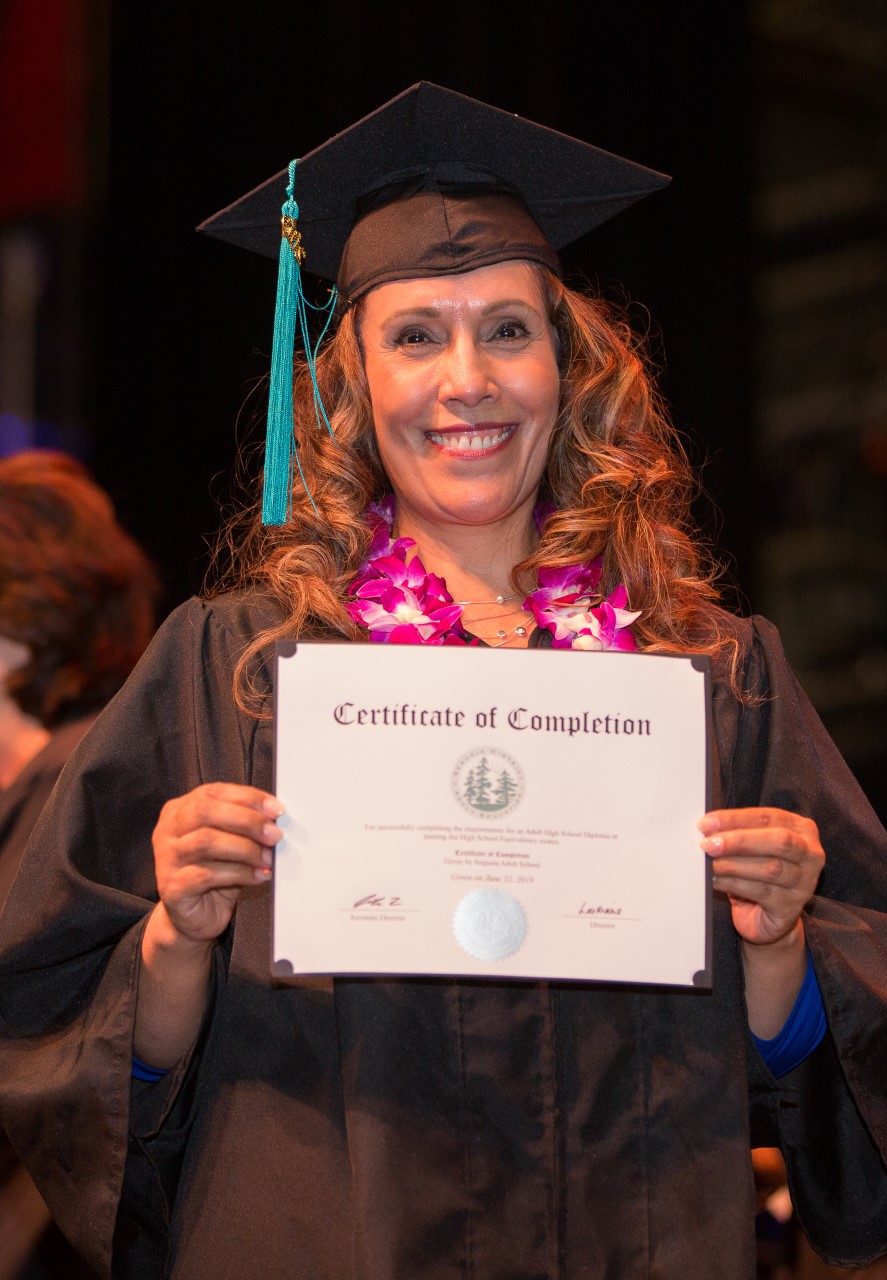 Despite her warmth and positive outlook, Gloria’s life has not been easy. When Gloria first arrived in the United States, she knew she always wanted to study. However, she knew that if she wanted to succeed in this country, she needed to speak the language. She tried to find the time to enroll in Sequoia Adult School’s English as a Second Language (ESL) classes. However, because of work, she could not always attend the classes. As time went on, Gloria started experiencing hardships at home, and due to a lack of support, she had to leave school to take care of her two kids. While she loved being there for her kids, she knew she wanted to continue her education. She had many ambitions, but as her life became consumed by her kids and a difficult divorce, she forgot about her educational goals. After some time, she decided to enroll in Cañada College, but she was only able to attend for one semester because she moved away to Hayward with her kids. Around that time, her son started suffering from depression. After many counseling sessions, it was revealed that he had attempted suicide, and she decided to put her goals on hold once again to care for him. After moving back to Redwood City, she decided to enroll once again in Sequoia Adult School, and while attending ESL classes, she had to stop and leave multiple times due to her son’s various suicide attempts. After some time, she finally learned that her son was transgender, and she finally began to take hormones to transition from male to female. Her daughter changed her name to Rachel, and Gloria assured her that she loved her either way. However, although things seemed to be going better for her daughter, three weeks before her 17th birthday, she decided to take her life. It took many long and hard years for Gloria to return to school.

Gloria had endured the worst pain imaginable, and after many years, while talking to a friend about her dream to be a medical assistant, her friend gave her a contact at JobTrain. Although Gloria felt she was too old, she also felt that she had to at least try and give it one last shot. She thought to herself, “I wasn't going to leave this world without attempting to do it.” Although JobTrain proved to be such a great first step toward getting back to reaching her goal, she felt she needed more direct instruction like what she had received at Sequoia Adult School. However, Gloria was embarrassed to return to Sequoia Adult School because she had started and stopped so many times. She finally decided to set her embarrassment aside and move forward with her plans and in 2019, she finally enrolled, 10 years later. She credits her success this final time to the support from her family, as well as from her two teachers, Alicia Aguirre and Brian Parnow. Gloria said that on her first day, Alicia told her that she tested really high in Language Arts, and that she was ready to take the official test. Gloria said that she was so nervous, but that Alicia’s talk and motivation filled her up with confidence, and it completely changed her mindset. Within two weeks, she passed her first test and three months later she received her High School Equivalency. After passing all her tests quickly, one thing became very clear to her, and that was that “Age does not matter. If you want it, you can do it and it doesn't matter how old you are. Anything is possible if you work hard.”

Once Gloria earned a high school equivalency certificate, she knew she had to keep going. Gloria enrolled into Mountain View Adult School’s Medical Assistant Program. Gloria left her job to attend classes everyday Monday to Friday from 8:00am to 2:30pm. Although she still struggled with her English, she was determined to not let it hold her back. She did not want to live with regret if she did. In 2020, Gloria was excited to be so close to her dream of finally becoming a Medical Assistant; however, to her dismay, her externship was halted due to the shelter in place order. She took that time to really think about her future and decide if working in the medical field was something she wanted to do. Although she was afraid of the uncertainty of COVID, she knew this was what she was meant to do, and she worked even harder to finish the program. After completing 200 hours in two months, in the midst of the panic of the pandemic, she found peace and happiness in her job of helping so many people navigate such a difficult time. In August 2020, she was finally able to have her dream become reality by completing the Medical Assistant program.

After the externship she started applying for jobs, and quickly found one working at the airport administering COVID tests to passengers. In the span of the following ten months from the start of her employment, she was able to get promoted to a Lead position. Since joining the company, Gloria has pushed for all employees to be trained in all aspects of the job. This position has opened up many doors for her and she is more confident now than ever in herself and in knowing what she wants in life. She loves working in the medical field where she feels she can bring comfort to people who are sick and hopes to continue her education so that she may be able to continue to help even more people.

Becoming a Medical Assistant has been a dream for Gloria for the past 17 years, and while she had to overcome many challenges to get to where she is now, she wants people to know that “You need to have discipline, because sometimes just wanting to do things is not enough. You need to take action.” She has had so many hardships and heartbreak but hopes that her story could serve as a way to help other students who feel lost, alone, or too old to start anew. She has accomplished so much and is now looking to her future for what comes next. She plans to continue studying and hopes to pursue a career in Radiology. She says she will study as far as life can take her; she says, “Only God can hold me back. This journey has been difficult, but not impossible, and even if you are scared, do it, follow your dreams, and when we think that everything is falling apart, it's actually falling in place.”