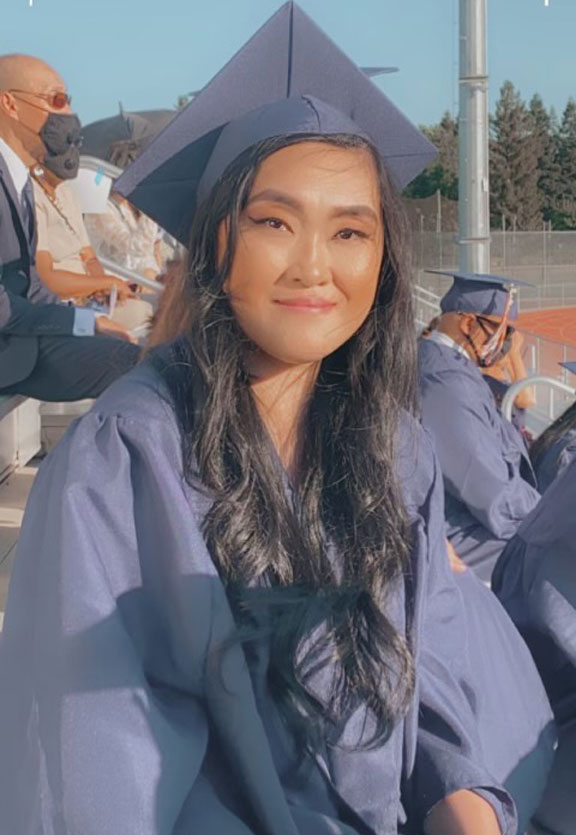 Amy Chan came to Charles A. Jones Career & Education Center in July of 2020 and entered the Medical Assistant Program. I met with Amy and her brother one day and it was a bit hard to understand why this young lady wanted to be a medical assistant. Knowing that the life of a medical assistant is pretty tough, looking at this young lady scared me a bit. You are on your feet a lot, sometimes no breaks, sometimes long hours due to the clinic being short staffed. I did my best to explain to Amy that it's a tough program, it's accelerated, and I'm a tough teacher. Do you really want this? Amy said that she did, so she registered. There was one more meeting between my administrator, Amy, and myself because of certain limitations that arose regarding Amy's health, doctor appointments, etc. Nevertheless, Amy began the program.

Amy has had a lifetime of medical issues to overcome, starting at birth in San Francisco. She has been in and out of hospitals throughout her life and has learned to survive despite the medical challenges. This has been difficult not only for Amy but her family as well; Amy has been the family translator for her parents who immigrated from China and did not speak English. As Amy was growing up, her mother would go to school and take care of Amy's medical needs. On top of this, Amy suffered being bullied at such a young age, so at times the principal had a nurse come to assist Amy; even though this was meant to stop other children from bullying her, it didn't. It was difficult for Amy to make friends at school.

Moving forward, school was a challenge for Amy. She was sick most of the time, so the school would place her in an individualized education program to get her the support she needed. In the 6th grade, Amy made a friend. Amy shared her condition with her new friend, and that night the friend's mother called Amy's mother and said her daughter could not be her friend because Amy was contagious!! In 2001, Amy's family made the decision to move to Sacramento because the house they were renting was not affordable any longer and rents in S.F. were getting too expensive. After more years of medical attention and hospitals and a transplant in 2005 that did not work, Amy was not able to attend school any longer and was homeschooled due to being immunocompromised. She ended up alone again.

During her school years, Amy never did complete the ACT or SAT and she tried to go to a community college, but her mother's medical condition became worse, so Amy made the decision to take care of her mother and give back the care her mother gave to her. Unfortunately, Amy's mother passed away in 2011. At that time, Amy wanted to go to school and become a RN, but because of her health issues and being sick, Amy could not complete her prerequisites in order to enter the nursing program. At this point, Amy decided to give up on the RN program and try something a little bit easier, namely, Medical Assistant.

Amy's positive attitude towards teachers, staff, and her peers is remarkable and refreshing because Amy has changed from when she first came to CAJ. During COVID-19, it has been a struggle for Amy as Zoom meetings were required until students were accepted back at school. Amy's contribution was for us to learn from her and her disability which many students were not aware of and the impact it has had and still has on her and her life. Amy came to school daily and on Fridays would fly to L.A. for very specialized medical visits. Amy is hanging in there for another transplant.

Amy's work ethic exceeds others; her passion is to help change people's lives and give them self-worth and confidence during struggles and hardships like Amy has experienced and is still experiencing. Amy is doing well on her externship; she has helped many Chinese patients because Amy is bilingual and speaks Cantonese and staff relies on her to translate. Amy is working the Front and Back Office, completes all tasks as required, and she is a tremendous help to all at her externship placement.

Amy has made noticeable strides within her program and in her own life. Adult Education has changed Amy's life and given her the drive to go after her dream. Amy will complete her medical assistant program this spring. This young lady was in pain, had to be treated for infections, administered antibiotics to herself, and never complained at all to anyone. This young lady deserves a Gold Trophy! She will not give up! Could you do what Amy's done? Not many can.