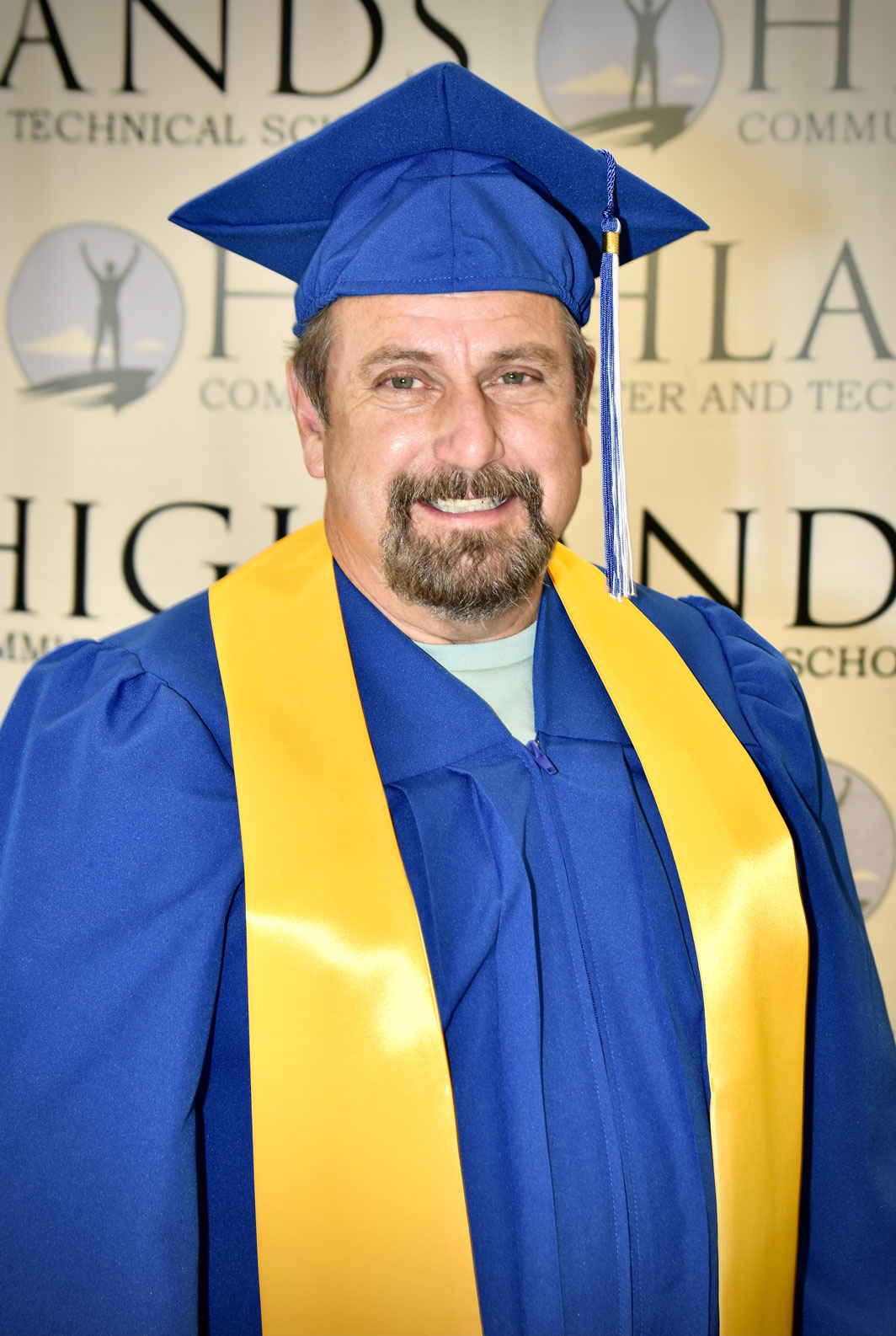 In 2017, tragedy struck for Kenneth after he went to the hospital to be treated for pneumonia. What came next would prove to alter the course of his life forever – he was later diagnosed with a condition called brain hypoxia which is the lack of oxygen to the brain when in a medically induced coma. For Kenneth, this brain injury left him in a low place in his life. He not only lost his job but had to reorient his cognitive and motor skills to be successful.

In 2019, Kenneth enrolled at Highlands and started improving his basic skills with foundational levels for Math and Reading to better equip him for core high school classes. This extraordinary hardship included physical barriers which meant that he could not drive back and forth to school. Kenneth did not give up! He traveled on public transportation two hours each way to get to and from school. Later when he moved closer to the campus, he rode his bike to ensure he made continued progress academically. Kenneth often exchanged news and information about his equilibrium and status of his rehabilitation with staff and teachers, but he did not quit even though he expressed feeling inadequate at times. This demonstrates his ability to overcome multiple obstacles and challenges faced in an effort to pursue his academic and career goals.

In 2021, Kenneth earned his high school diploma and completed a career technical education program which has demonstrated an extraordinary commitment to his studies and desire to succeed after a long road of physical and emotional recovery. Kenneth wanted to express a special thank you to two of his instructors, Michael Lamb and Sergey Ivanyuk, who were extremely helpful in getting him through his studies.

Over time, staff has witnessed his increasing confidence in the classroom, through his engagement and interactions with others. An example of his contributions to the classroom was that he showed up every day ready to learn. He worked with other classmates so they could improve their skills in their academic subjects. He inspired others by feeling brave enough to share his story. All of which built his confidence, increased his determination to complete his high school and Career Technical Education (CTE) requirements, and he is now employed in his desired field.

To validate his commitment with his goals when he came to Highlands, we are pleased to say that he has successfully earned his high school diploma, completed the truck driving program requirements, and is now employed! Throughout the years at Highlands, he often expressed his desire to get back on the road as a Commercial Driver. Additionally, he took initiative and utilized other Highlands resources to gain workforce skills to further develop himself to achieve this goal. And, with staff support at the Center he received services such as interview preparation, resume support, and other soft skill development. He completed this goal, and we are pleased to say that he is working for a local truck driving company. This has allowed him to be financially stable and positively contribute to his household.

Kenneth overcame difficult circumstances and persevered to get back on his feet to ultimately make a difference in his life and the lives of others. Kenneth is now settling into his new role and his plan for the future is to continue to show up every day, not only for himself but for his family. Kenneth exemplifies the mission of Highlands which demonstrates that "It's Never Too Late."