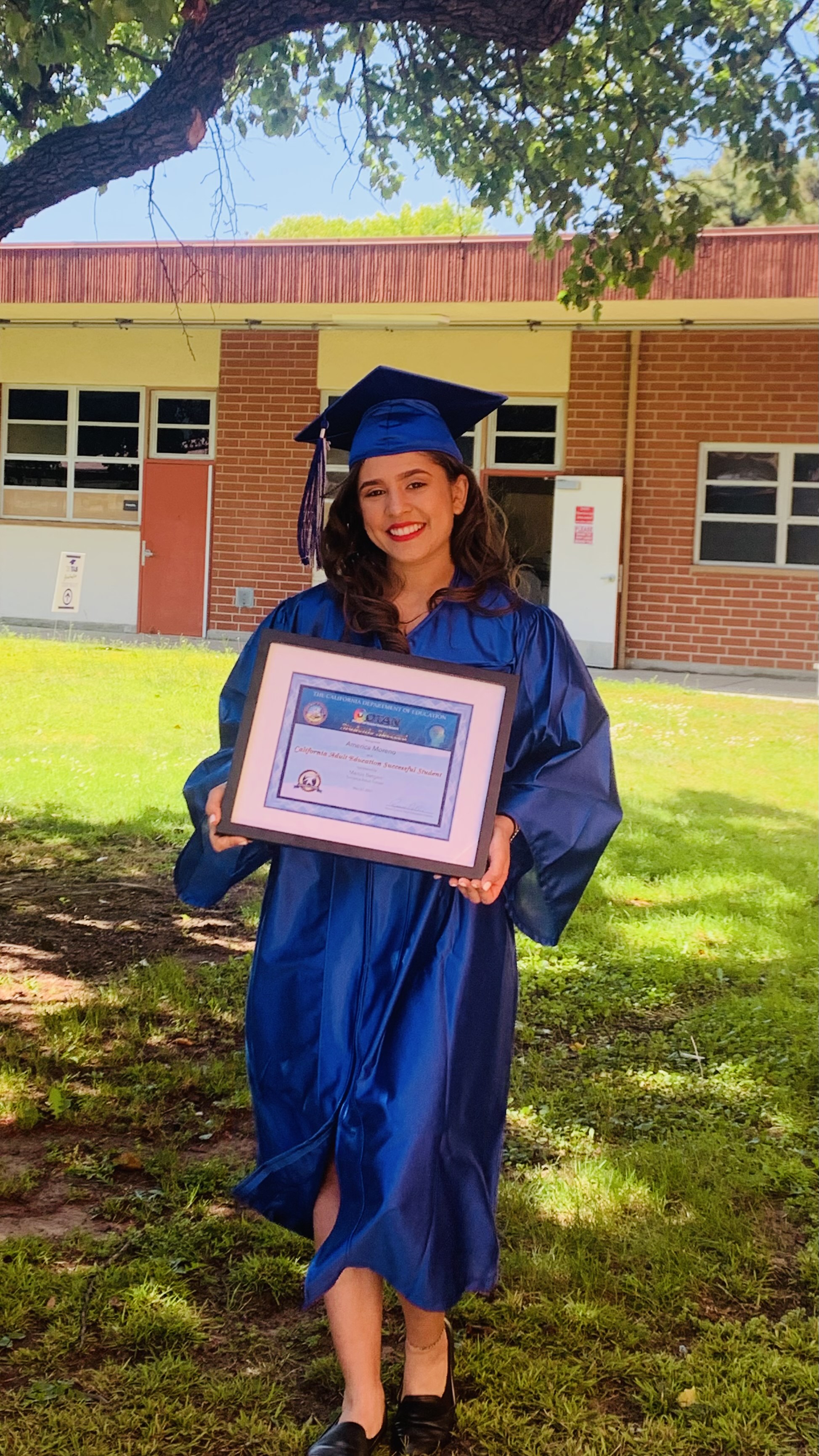 America Moreno has demonstrated outstanding motivation, persistence, and work ethic under difficult circumstances. At 18 years of age, she came to the United States to escape the violence in Nicaragua. Living and working with a language she did not understand, she faced a life in a new country without her parents. In order to pursue a career in nursing, dietitian, nutritionist, or social work, she needed to learn the language and move on to her goal of attending college.

While speaking only Spanish, America interviewed and was hired to work in the stock room at Marshalls. At the same time, her mother brought her to Torrance Adult School where she enrolled in both ESL level 3 and Reading Development B. America clearly remembers her first day at the school. As her mother was speaking with Sharon Freeman, America was crying. She could not understand what was being said and she felt afraid and frustrated at the same time. Her mother was about to return to Nicaragua and America was feeling the loss of her parents. Ms. Freeman assured America's mother that her daughter would be in good hands.

America began the cycle of working 8am to 5pm at Marshalls then going to school from 5pm to 10pm. Her co-workers at the store spoke to her in Spanish so she would know what to do in the stock room. At school she worked on learning to read and speak in English. She focused on increasing her vocabulary. As her English skills improved, she was moved at her job to be a fitting room attendant where she would be speaking more with customers. Her efforts and achievements at school impressed her teachers so they offered to move her up two class levels. America declined the offer saying she wanted to work in each level so as not to skip anything. During this time her teachers were motivating her, encouraging her, and becoming like second mothers / family to her. She continued to improve her language skills and was promoted again at work to cleaning the sales floor. She interacted more with the customers and received many positive customer reviews. This led to her being promoted to a cashier position. At school, America was passing course after course. Her reading and vocabulary were improving. She next began focusing on essay writing and studying Science for the HiSET exam. America changed her schedule to working at school all day and working evenings and weekends at Marshalls. In her spare time, she read books and watched movies to increase her vocabulary.

Since America joined us in May 2019, she has completed fourteen courses, earned her High School Equivalency certificate, enrolled in Harbor College, and is presently completing her last course for her high school diploma. She has been a popular student among her teachers. Seeing her persistence and motivation has impressed her teachers and counselor. She has been friendly and polite as well as a hard worker that wants to make her parents and her teachers proud of her. America has assisted the adult school by making marketing videos. She is focused on choosing a career path to help others. She looks forward to attending a university.

America's achievements in the last two years truly demonstrate her ability and desire to succeed and overcome difficulties. She faced numerous difficult situations all at the same time. Moving to a new country, learning a new language, working full time, and attending school all while separating from your parents for the first time would be very difficult for any person. She has mastered all these and is moving on to her future goals.