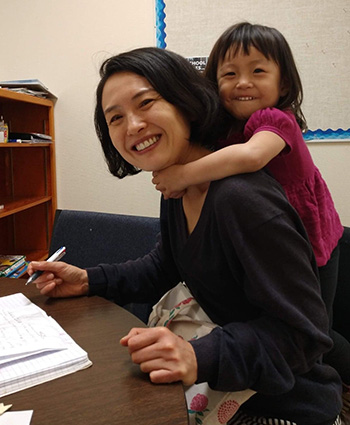 Tomoko came to California with her husband and two children. Since her husband had a job, she was home with limited ability to speak English and had to care for her children. After having her third baby, she started to do yoga in Palo Alto. It helped her emotional and physical well being. She became a member of the YMCA since it has a kids club and she wanted to do yoga more often. She was feeling so much better and decided that proficiency in yoga was the best thing for her to dedicate her life to in order to live a more stress free life and also to help facilitate this new life for her children.

She also enrolled in the CBET program at Palo Alto Adult School for ESL to improve her English speaking in order to help her children and volunteer in their school. The teacher, Nikki, always corrects her English and gives her better expressions which helps to expand her vocabulary. This has been very helpful when she speaks with her children's teachers and her children's friend's mothers. It has been extremely beneficial to have a teacher once a week to help her with all aspects of English so that she can be of more help to her children. This has brought her to the point where she has received a yoga instructor certificate from the yoga studio "Avalon" to realize her dream to teach yoga in America.

She decided to take a program to learn how to become a yoga instructor. At this point, she encountered a few more challenges. The most difficult problem was that she would not be able to attend many classes since her husband traveled a lot. In addition, she didn't normally use a babysitter. The second problem was she wasn’t sure that her English level would be high enough to take this program. However, the yoga studio director told her that she would be able to make up missing classes and her English skill would improve.

She was really excited to do this but she felt a few more challenges throughout the program. One of them was listening. During classes, there were many technical terms, so it was very difficult to "get it." The second challenge was reading. She had to read many books. It took a lot of time out of her busy day. The biggest challenge was to learn "cueing" expressions. This was much harder than she thought it would be. She’s still working on these challenges!

She received the certificate to teach yoga within four months of the yoga teacher training. She was hired at the YMCA as a yoga instructor and she has her class there.