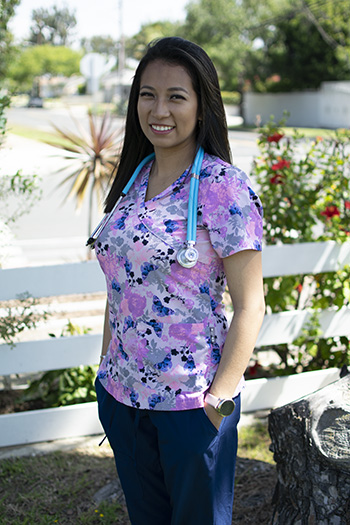 Marlyn is from Guatemala. She has been here in America for four years and has been studying ESL at Torrance Adult School the entire time. She received her citizenship two years ago when she reached the highest ESL level (Level 5). She felt confident with her English language ability and was ready to begin studying for her health career.

She first enrolled in our Medical Terminology class for the ESL learner. This class is for three months and she studied very diligently, earning 98%. At the end of this course, she learned that she was going to be expecting her first child with her husband, but this did not deter her in her studies. Determined and focused on her next step, she enrolled in our Medical Assisting Program which is five months in didactic theory with a hands-on skills lab and 160 hours of an externship program in which she would volunteer at a medical facility or a physician's office. She completed the didactic theory, the hands-on skills lab achieving 99% overall. This was amazing because she was pregnant and handling it all.

Months before her externship was to begin, she applied for her work permit and her husband was her sponsor, but she was informed that her husband could no longer sponsor her because his job had cut his hours from 40 hours per week to 20 hours per week, so her application was denied. Marlyn was heartbroken because this was her dream of working after completing her training as a medical assistant. Then her father-in-law offered to sponsor her; however, during this process she was completing her externship hours at an Endocrinologist group practice and they offered her a job, but she had to decline the opportunity because she did not have her work permit status cleared. She was devastated again.

Marlyn had her baby boy and two months later she received her cleared work permit. She went back to the Endocrinologist practice and they offered her a full-time job as a Lead Medical Assistant. Marlyn is now going to further her career and get trained as a Certified Phlebotomist Technician. She is so excited and always ready for the next big opportunity that presents itself, and she will never settle for less than what she has worked so hard for.