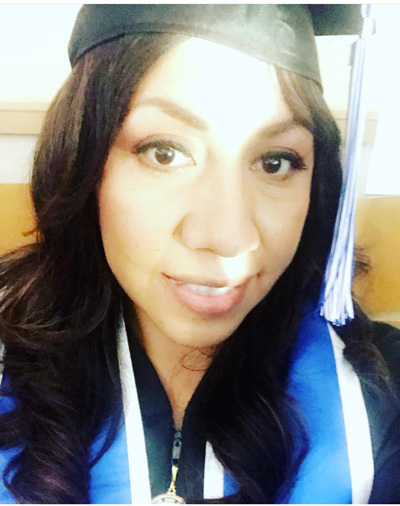 Rocio Flores Cadena immigrated from Mexico to the United States with her family at the age of 11. This time in her life was tumultuous as she and her family went back and forth from the US to Mexico while her father and the family were processed through an amnesty program that was a pathway to US citizenship that took about 10 years to complete. Rocio's father worked in the strawberry fields in North San Diego to support the family and Rocio ended up taking care of the entire family life at home as her father battled alcoholism and her mother battled cancer. Because of the hardship of her homelife, Rocio dropped out of both middle and high school; she eventually left her family and became a mom for the first time at age 14. After enduring a mentally and physically abusive relationship, Rocio took her two young sons and escaped to a women's shelter.

At the shelter, Rocio was counseled on the need to learn English and to go back to school in order to best support herself and her small children. From 2011-2012, Rocio attended the MiraCosta College Noncredit ESL program, working through all the progressive levels to learn English. She completed her High School Diploma in 2013 and then began work on her associate’s degree at MiraCosta College. In 2015, she completed an associate degree in Spanish and in 2016, she completed another associate degree in Liberal Studies; she completed the second AA degree because she was afraid to leave the security and strong community she had found in Continuing Education as well as at the credit program of MiraCosta College. During her time at MiraCosta, Rocio was the president of the Spanish Club in 2014; she also volunteered as the Business Manager for the school’s student newspaper, the Chariot. During this time (and continuing today), Rocio worked for the State of California providing care for a young man who is autistic and is also unable to walk. Rocio was able to successfully navigate and complete her AA degrees with support from the EOPS Program (2013-2016) as well as working to support her children through the CalWORKs Program for single parents.

It was at this time that Krista Warren met Rocio after hiring her as a student worker to assist in her classroom, supporting students with intellectual disabilities in the noncredit Continuing Education Program. This opportunity turned into a more permanent position as an Instructional Aide in noncredit, continuing to support adults with disabilities as well as working with ESL students. Rocio made a successful transition to California State University San Marcos and with continued hard work and three scholarships, graduated with her bachelor’s degree in Spanish in 2017.

After being an honor student in her baccalaureate program, Rocio has continued her educational journey and is now enrolled at CSU San Marcos, working on her master’s degree in Spanish and Latin American Culture; she will graduate in 2020. As part of her master’s program, Rocio recently spent three weeks in Guatemala, working in the mountains with the villagers, helping them rebuild their homes, ruined after years of civil wars, crime, and unrest, and also teaching them to read and write as well as how to plant and grow self-sustainable crops to deal with the poverty and hunger issues they have endured.

Rocio continues to work at MiraCosta College as an Instructional Aide as well as a Spanish tutor in the credit program. Rocio volunteers regularly with the MiraCosta Food Pantry, encouraging her ESL students to get the food they need and volunteers her time in the language lab at the college, supporting credit students in conversational Spanish. Rocio takes care of her 15-year-old son who is now in high school, she continues to support her parents and is an inspiration to the students she studies with in her master’s program, as well as those she supports in her work at MiraCosta College.

Having immigrated from another country, enduring an abusive relationship, as well as being the single mother of a child with a disability has given Rocio strength, empathy, and wisdom that is hard to describe. Rocio has been motivated through her life experiences as well as the programs at MiraCosta Continuing Education to the studies she continues now. Because of the connection to special education she has developed from her son’s needs, she has been able to give back and instills in ESL students that their goals for an education, a better job, community integration, and career study are possible because she has accomplished all these goals herself. She is a compassionate and inspiring model to all our students, as well as our faculty colleagues and anyone who is lucky enough to work, learn, and teach with Rocio. Upon completing her master’s degree in Spanish, Rocio will work full time at either the high school or college level, teaching Spanish.