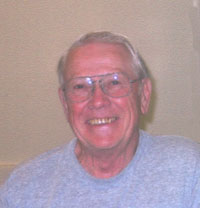 Marvin Tarbox retired in 1986 after thirty-two years with the Pacific Telephone & Telegraph Company. During his last twelve years with the company, Mr. Tarbox took care of the electronic telephone system. Mr. Tarbox felt that retirement is great, “but a person needs to keep active and learning, even at seventy plus.” Computers seemed to be the answer.

Mr. Tarbox wanted to go back to school to learn about computers, but it had been over forty-five years since he had been in a classroom. Marvin decided to be proactive and signed up for Computer Literacy/Windows 98 at South San Francisco Adult School. This class taught all about the components of a computer, from the monitor to the mouse.

Although the computer literacy class taught him the basics, Marvin wanted to learn more. So, he signed up for Computer Maintenance and Repair. In one year, Marvin completed two levels of Computer Maintenance and Repair classes and his instructor soon realized that Marvin had a talent for computers. Marvin was asked if he would like to volunteer his time and skills to the computer program at the South San Francisco Adult School. Marvin decided that volunteering was a way to give back to the community.

Marvin has been volunteering at the adult school for five years, donating countless hours doing everything from relocating the computer labs to every day routines. He says, “Having learned the basics, I can put it to good use so adults and seniors can continue to learn and move on in knowledge.”

Marvin is thankful to his instructors and school administrators for providing him the opportunity to develop his computer skills, exposing him to new things and meeting new challenges. He has been a great asset to the adult school: keeping the computer working keeps the class going.

Mr. Tarbox also volunteers his time at his community church where he helps to maintain computers. Most recently he helped set up a computer lab at a homeless shelter.

Marvin did not realize that his new hobby would soon become his passion and a second career. “I’ve enjoyed every minute,” says Marvin. His motto is, “You are never too old to start doing something for ourselves and for others.” Marvin says, “Volunteering is a way of life…we are used to working all our lives and volunteering has become an extension of that. It gives us something valuable to do, and I enjoy helping people.”