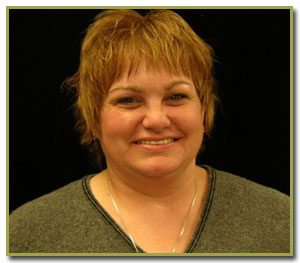 Tracy Walker moved to Garden Grove in August of 2001 to escape an abusive relationship. Her self-esteem was at an all time low. Her brother, with whom she was living, told her that she had to go to school or get a job. She chose school.

In January of 2002, Tracy began a typing class and then a Microsoft Office class. To her surprise and her teacher’s, she completed the classes on February 1, 2002. She was enjoying school and regaining her “self” back. Since the class needed an aide, she volunteered to help the teacher, Sally Cox for the next few months.

During those months, Sally convinced Tracy to apply to the district for a paid position as an instructional aide. She took the test and failed by two points. When Sally found this out and checked into it, she found out that Tracy had taken the wrong test. She had taken the technology test instead of the instructional aide test.

Tracy returned to the Garden Grove School District office to take the correct test and passed it with flying colors. She was then assigned to an elementary school as an instructional aide. Although she was disappointed, Tracy, also a single parent, knew that she had to take whatever was offered.

Seeing the look on Tracy’s face, the personnel director told her that there was also an opening at Chapman Education Center. She eagerly accepted it, hoping it would be in Sally’s room where she felt very comfortable. Again, she was surprised to find out that she would be an instructional aide in the high school diploma program.

Tracy’s life experiences had prepared her to meet the challenges of students in an alternative education program. The diploma program attracts students of all ages and walks of life. Students come with determination to study and to achieve their goals. Students receive guided instruction in all the high school subjects. Technology is integrated into the curriculum. Students are given individual instruction whenever necessary and individual learning styles are respected.

Tracy was able to move out on her own about one year ago thanks to a second job opportunity with the Boys and Girls Club of Garden Grove. She is now Assistant Director at her school site and receives medical benefits.

Tracy would like to go to college and get her teaching credential when her daughter Cheyenne, age 10, gets a little older. Right now, as a single mother working two jobs, she is happy looking forward to a rewarding future.

Update: Tracy's future is looking more rewarding. She recently started working as a receptionist in the Cosmetology program at the Chapman Education Center. "Truly one of our biggest success stories," says Melanie Wade of Garden Grove Adult School.