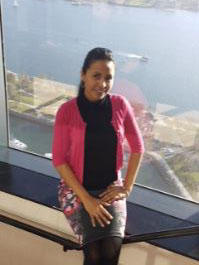 From her quiet, unassuming demeanor, one may never guess that Ruth Balderas is a goal-oriented, "driven" individual. However, according to nominator Wesley Braddock, "During my four years as Principal of Chula Vista Adult School, I have never encountered someone so focused as Ruth."

Ruth came to the United States with limited English skills. She originally enrolled in the English as a Second Language program at Chula Vista Adult School. Through her dedication to speaking virtually only English and studying non-stop to understand the nuances of the English language, she has reached fluency in a very short time.

Using her language fluency as a "springboard," Ruth eagerly sought out opportunities to grow in her personal as well as academic skills. She took classes in Adult Basic Education and shortly thereafter received her High School Equivalency certificate after passing the tests in both English and Spanish! She also attended a variety of Career/Technical Education classes, including classes in the Medical and Office Skills realm.

After accomplishing that goal, Ruth began to volunteer in the Main Office of Chula Vista Adult School, learning valuable clerical skills as well as honing her "interpersonal" skills in order to best meet the needs of our students and community members.

Once she felt that she was ready, Ruth began to research the necessary steps in order to become an employee of the Sweetwater Union High School District, passing the highest level exam for clerical employment: Senior Administrative Assistant. By passing that exam, it made Ruth eligible for employment for virtually any position available in the Office/Technical field in the district.

After substituting as a clerical sub for a relatively short time, Ruth was hired at Eastlake Middle School as an Office Assistant and she will soon be concluding her first year in that position!

Ruth embodies the potential that all of our students have as well as the role that Adult Education can play in allowing our students access to the "American Dream." The fact that she has recently attained her US Citizenship makes our country better, without a doubt.

As Wesley Braddock says, "I cannot think of anyone that I have met in my four years in this position that is more deserving of recognition than Ms. Balderas."