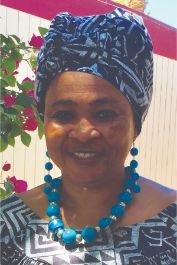 Lucienne Kegne epse Simeu (also known as Lucia) has been a student in a High-Intermediate English as a Second Language (ESL) class at Pittsburg Adult Education Center since March 2014. This is part of the story about her passion, at the core of her being, for education.

Lucia was born in the French-speaking section of Cameroon, Africa. She could not start school until age 10 because of the civil war. At age 12, she had to quit school to care for her mother and a new baby brother after a difficult delivery. Her father was also ill, so Lucia helped look after the entire family. Without money to continue her Catholic school education, Lucia resigned herself to her new responsibilities.

Two years later, after improvement in the family's health and finances, Lucia's mother hoped she would return to school. However, her friends were now in higher grades, so Lucia was too ashamed to return. She focused instead on her little business where she made and sold a traditional cracker in the marketplace.

At age 18, Lucia married and had her first baby a year later. Though she desperately wanted more education, her husband would not allow it. Again, she contented herself with caring for her growing family, reading whatever she could find in her spare time.

In November 2012, Lucia's oldest daughter, a medical doctor living in California and a U.S citizen, brought her parents to Pittsburg. Lucia arrived speaking French and several African tribal languages. Although she looked after her grandchildren, she had free time while they were at school. Lucia wanted to learn English to better care for her grandchildren, to be able to communicate with her school, and to call 911, if necessary.

Because she recognized English cognates of French words, Lucia scored well on the CASAS reading test and started a low-beginning ESL class at Pittsburg Adult Ed. After passing three levels of ESL in 15 months, Lucia joined the High-Intermediate class. She credits two class activities in particular with a lasting effect on her life. First, reading an English learners newspaper with articles from the New York Times and the Washington Post, followed by discussions and writing, helped her organize and remember what she learned about the world. Computer research activities enabled her to find practice tests online for the Certified Nurse Assistant (CNA) state examination, which she passed in early 2018 after taking CNA classes.

Lucia had been working full-time at Windsor Manor Rehabilitation Center in Concord. She switched to part-time in order to continue taking classes and to care for her grandchildren after school, teaching them French. She's proud of her achievements, but she's not finished with her education yet.

Lucia is a member of the Bamileke Association of Northern California, which helps new Bamileke immigrants become acculturated. In 2017, she gave a speech to them on the women's suffrage movement and women's rights and is planning another about women's inventions.

Lucia belongs to a line of strong women with a passion for education and hard work. Her grandmother Marie Mafotsing was the first woman in her village Bamendjou to work in a hospital, delivering babies, received a medal order of merit from the first president of Cameroon in 1968. Her daughter's "big education" allowed her to come to the United States. And Lucia's mother, who hoped that Lucia would go back to school, would be proud of what her daughter has achieved.