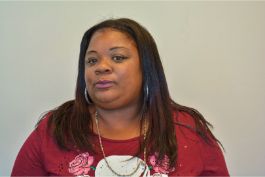 In September 2017, Patricia Holmes earned her high school diploma. This accomplishment is a defining moment for all of our adult learners. For Patricia, it was especially significant as this moment also capped off a long struggle which saw her fighting her way back from the lowest point in her life.

In the summer of 2004, Patricia's husband left her, and within ninety days her car was repossessed and she was facing homelessness as a single mother with a criminal history. This wasn't the first time she dealt with uncertainty: growing up as a foster child, Patricia bounced from home to home and school to school, got in fights with classmates, and ultimately dropped out in 6th grade.

Shortly after hitting what she describes as "rock bottom" in late 2004, Patricia moved to Sacramento, California for a fresh start, but the path wasn't clear. She attended two different adult schools, one for two years, the other for only two weeks, only to realize she was no closer to her high school diploma than when she started. She began to feel like giving up was her only option.

Eventually, she found a coach who would help her map out a game plan for her life. When asked what her obstacles to success were, Patricia replied "a lack of education, a lack of self-confidence, and a criminal record." Her coach directed her to the Greater Sacramento Urban League, where she enrolled in the Higher Heights Adult School program in partnership with Highlands Community Charter School and started attending classes in May 2015. In February 2016, through resources found via the Urban League, Patricia started the felony expungement process. In December 2016, after testifying to the positive changes in her life through education and determination, Patricia's record was cleared.

At Higher Heights Adult School, Patricia found not only a home away from home, but a place to learn and thrive. The journey wasn't always easy, though. Her early-morning commute to take her kids to school then get across town to attend classes herself took an hour-and-a-half on two buses and the light rail, a trip she then repeated in reverse to get back home. While she was overwhelmed at times with everything she needed to do to graduate, Patricia stayed dedicated, took advantage of Digital Literacy classes and the HiSET exam, excelled in English and Algebra, and graduated ahead of schedule!

This was just the beginning for Patricia. Since earning her high school diploma, Patricia has blossomed in leadership and confidence. She gained full-time employment at a non-profit organization shortly after graduation working with the homeless and displaced community in the Sacramento area. With her bright smile and fun-loving personality, she quickly became one of the most beloved employees there. Recently, Patricia was promoted to Case Manager and she now supervises her own caseload of displaced community members in Sacramento. In addition, she is attending community college where she is pursuing an Associate's degree in Human Services and was recently able to purchase a new car!

Patricia's journey embodies everything important and meaningful about what staff strive to accomplish at Higher Heights Adult School and Highlands Community Charter School. The goal is not just to help students earn their diplomas. It is to instill valuable skills, leadership, and confidence in the students so that they can go on and achieve wondrous things.

It's never too late!