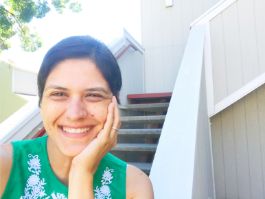 Gabriela Lugo moved from Mexico to the United States four years ago with very limited English skills. As a mother of three children (under ten years old), she immediately enrolled in English as a Second Language (ESL) classes in order to more quickly assimilate.

An enthusiastic student, Gabriela attended regularly, worked hard, and soon was confident enough in her English skills to volunteer at her children's schools. She became very involved in the Parent Teacher Association and other school activities and grew more efficient at daily skills such as shopping, banking, and especially "doctor's visits " as she and her children needed various medical procedures.

Gabriela also became a member of the local International House, a UC Davis affiliated "welcome center " for students and faculty from abroad. Quickly volunteering, she soon came to teach culinary classes (in English) to others.

Encouraged by her ESL teachers and others, Gabriela eventually started her own catering business which quickly became successful.

In class, Gabriela was always responsible, reliable, and eventually became a "helper " as she would assist with materials, translate for newcomers, and became beloved by students for her positive attitude and help learning about Davis.

Additionally, Gabriela was always willing to serve on committees or workshops organized by the ESL program. She always gave her honest opinions and suggestions in order to help the ESL program develop better teaching methods.

She accomplished all this while undergoing medical treatments for a thyroid condition (which she said "didn't slow me down "). And while Gabriela is still enrolled in ESL class, her attendance is limited as she has been completing chemotherapy, which she says, "isn't that bad."

She still cares for her children, teaches cooking class, and caters when she can.

Of the hundreds of wonderful, successful ESL students Davis Adult School has served over the years, Gabriela Lugo stands out as a special person.