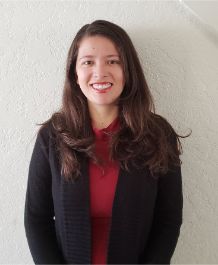 Evelyn Segura's mother died in Guatemala when she was a year old, leaving her to be raised with an aunt who later mistreated and abused her. At the age of fourteen, she ran away from home. It took her a month to cross Mexico to the US border. She crossed the border with the help of the "coyotes." The journey across the Arizona desert to California lasted three more days and nights. The guides then delivered her to her other aunt's home in Los Angeles, but not without her having been sexually assaulted and impregnated by one of the guides.

Even though Evelyn was in a new location, she faced similar mistreatment. She lived with her aunt and a cousin who she thought of as a sister. While Evelyn was attending an all-girls school with pregnant teenagers, her cousin got her a fake ID card and made her work in a bar where she was subjected to all kinds of abuse.

The high school officials referred her to the foster care system where she was able to get an attorney who fought for her, and she was finally granted medical and dental care for her and her daughter as well as legal immigration status. Because she had to live in a group home and take care of her daughter, she stopped going to school. Later, she was able to qualify for transitional housing with the help of Social Services.

It was in 2013 when she decided to go to an adult school, which was Eastside Learning Center in East Los Angeles. She received her high school diploma in 2015 and that opened up the door for her to attend her local college, East Los Angeles College (ELAC). This is when ELAC instructor Khetam Dahi met her in the Reading 25 class, and when Khetam mentioned the ESL Club in class, Evelyn went and joined right away and became an excellent volunteer. She made many friends along the way and stayed active in the club. The following semester, she became the Vice-President of the club. Evelyn's energy and enthusiasm attracted more people who started joining and the club grew exponentially the following semesters.

Right now, Evelyn has her own place, and has taken in a friend who is currently going through a divorce. She has provided a safe home for her friend, who would otherwise be homeless. She is also enrolled in the Respiratory Therapy Program at ELAC and is working as a caregiver at Health Talent 2 where she takes care of the elderly.

Evelyn's future goal is to graduate and get a job in a hospital to help the elderly who have breathing problems. She loves helping others and is always positive. Evelyn is a great role model for all women who have struggled and found ways to overcome obstacles. Khetam believes it was the adult school where Evelyn discovered the love for learning and it was there where she found friends who had faced similar struggles. Finally, it was at the adult school where Evelyn learned that she could go to college and follow her dreams.