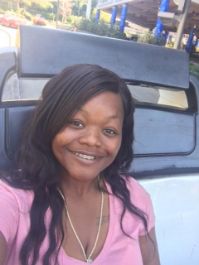 Biltishia Jester works for the Antelope Valley Adult School high school diploma program as a part-time instructional aide while she continues her education. She is a great inspiration to the students, having literally been in their seats.

Biltishia first enrolled at Antelope Valley Adult School in September 2004. She came back to school to get her high school diploma, but she was not mentally ready to finish the task. She could not recall if she ever attended any classes. What brought her back to the adult school in 2010 was that her life had hit an all-time low. She did not have a job, her car was up for repossession, and she was homeless and had to move back in with her parents. When she enrolled back into the program, her educational goals were to earn her high school diploma no matter the obstacles. She knew if she wanted to have a better life than the one she was currently experiencing, she had to go back to school.

Biltishia's goal once she had earned her high school diploma in 2011 was to attend Los Angeles Southwest College and major in Administration of Justice so she could become a probation/parole officer. After living in Los Angeles for a couple of years, she decided to move back to Lancaster because her living arrangement was not working out. Her move back to Lancaster proved to be a great decision because while she attended Antelope Valley Community College, she was able to thrive in an environment that promoted success for its students. It gave her an entirely different experience than the one she had previously encountered at LASC.

Biltishia says that the funny thing is she never imagined a person like her going off to college. She would have to say the support from friends and family and her life experiences showed her that she needed an education to acquire a more profound life. She was tired of disparities and inequalities all due to her economic status. She admits that she has enjoyed her educational journey along the way. The power she feels and the knowledge she has obtained has made her a better overall individual and she's so lucky to be in the position she is in today.

Biltishia is working on getting her Master's degree in Social Work. Her career goals are to work in an impoverished urban community at a school institution preferably with public schools. Her long term goals are to open up her own foster residential care facilities and give children who have been displaced and removed from their biological family a loving and nurturing living environment, somewhere they can call their home even though they no longer reside with their parents. She wants them to be confident in knowing their present situations do not define their future endeavors.

Biltishia owes so much to Antelope Valley Adult School for providing her with Sharon, an awesome Instructional Aide, and Mr. Lara, a wonderful teacher who was always there for her, by helping her along the way and never giving up on her. He challenged her and for that she will forever be thankful. In addition to these two people, she also mentions Evelyn Lenton, the High School Diploma Program Coordinator, and her compassion, devotion, patience, and encouragement along with her ability to empathize, which helped Biltishia so much. Biltishia learned resiliency while she was a student at the adult school; she cannot tell you how many times she wanted to give up when she encountered a difficult math problem or when she couldn't expand on writing ideas to complete an English assignment. She learned how to face her fears and to believe in herself all because of the challenges she experienced at the adult school. The Antelope Valley Adult School built a good foundation for her educational journey, but it was Evelyn Lenton who really made a difference in her life and is one of the reasons why she has made it thus far with her education, and for that Biltishia will be forever grateful to her!