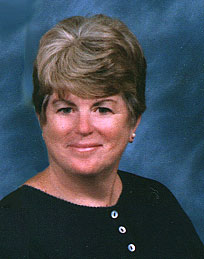 In 1958 at the age of 16, Nancy Greening left Redlands High School to marry and raise a family. At age 17 she had a son, and just 11½ months later, gave birth to twin girls. But, Nancy understood the value of finishing her education and, with a vision for the future, enrolled in Redlands Adult School. Going to school, while caring for three toddlers and working as a lifeguard and swimming instructor in Yucaipa, wasn't easy. But Nancy had vision and graduated in 1961 in, what was then, the largest class in Redlands history — 53 graduates. The year was 1961.

Nancy spent the next five years raising her family, then in 1966 she decided to enter San Bernardino Valley Community College. Two years later she transfered to Cal State, San Bernardino and earned a Bachelor's Degree. She was a single parent during her college years. The balancing act from her adult education years continues as she worked part-time, raised her children, and went to school — but she never lost her vision.

Having graduated with a B.A.Degree, Nancy went on to complete her teaching credential requirements, and later earned a Master's Degree, an Administrative Services Credential, and a Learning Handicapped Credential. Since 1975, Nancy has been employed by the Yucaipa Joint Unified School District. She has served in several positions including, resource specialist, kindergarten and second grade teacher, and principal at two elementary schools. Last year (July 2003) Nancy was appointed principal of Yucaipa Adult School where she plans to continue until she retires.

Redlands Adult School provided Nancy the opportunity to earn a high school diploma, and Nancy's own perseverence and vision took it and made her dream a reality. She has touched the lives of thousands of children, and as a caring and dedicated adult school principal she is making an impact on the lives of countless adults. Nancy has also had a large and positive impact on her community. She participates in PTA, the American Field Service, Associates of the Redlands Bowl, the United Methodist Women and Order of the Eastern Star, and is a member of Phi Lamda Theta and Alpha Delta Kappa.

Among Nancy's greatest achievements has been raising her three children. They are all stories of success themselves, following their mother's example and graduating from college.

Life has come full circle for Nancy. She entered adult education so that she could pursue her dream of being a professional educator. She is finishing her career in education as an adult school principal. A close friend with whom she graduated in 1961, but didn't meet until years later, says of Nancy, "She is an absolute treasure and so deserving of this" honor. Nancy still has the picture of her adult school graduation. It hangs prominently on her office wall, and she is proud to tell her adult learners that she is an adult school graduate and that they can also achieve their goal.