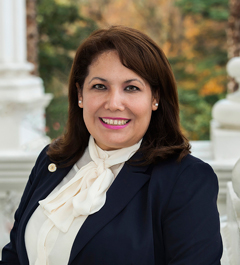 Originally from Michoacán, Mexico, Assemblywoman Patty López came to the U.S. at 12 and grew up in Pacoima. While raising her own family, she started studying at the North Valley Occupational Center. As a mother of four, she knew educating herself was the best way to provide a better future for her daughters. She took basic ESL and high school classes, GED preparation, vocational and college courses.

Patty became active in a local parent group that worked with the Los Angeles Unified School District to help failing schools. She gradually expanded her political and community organizing roles, and was especially concerned by the elimination of adult education funding at the height of the state's financial crisis.

The desire to help her community led to a decision to run for the State Assembly in 2014. In a surprising upset, she won the election and took office as a political novice. She has since introduced legislation in key areas of concern to her and her constituents. Four of her bills have been signed by the Governor.

Locally, she has hosted dozens of free workshops on housing, education, small businesses, immigration and other issues. She has been a champion for the people in countless ways.

Now, Patty is fighting hard to rebuild the adult education system in California. In 2016, she introduced a bill to restore funding to pre-recession levels.

Whether from within the legislature or elsewhere, Patty's plan is to continue working hard to improve our communities, and she is deeply committed to helping people understand our system of government.

Patty overcame difficulties in her life by educating herself and taking the time to learn something new each day. Having access to adult education programs helped her achieve her goals and it is one of the reasons she wants to ensure that other adults have that same opportunity.