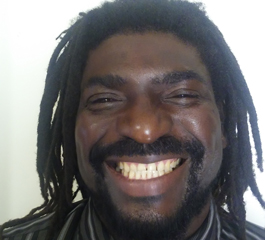 Jeffrey George came into the Sonoma County Library’s Adult Literacy Program in August 2014 to sign up for weekly tutoring and to work on literacy and life goals. He was assessed at a beginning to beginning intermediate literacy level at that time, and his primary motivation was to be able to help his three young children with their reading, writing, and school work. At that time, Jeffrey was a full-time stay at home dad who knew he wanted to be of more help to his wife and children. His recorded goals were: learn the alphabet, reading, writing, and spelling in order to help his children and interact with their teachers at school. However, Jeffrey also set a goal to obtain a driver’s license and a business license on that same assessment date.

Jeffrey was matched with volunteer tutor Laura Owens who shares the following about their work together, “Jeffrey was a pleasure to coach; he was motivated, always receptive, grateful, and in very good spirits, even though he was working several jobs as well as being tutored, and being a dad and husband.” Together, Laura and Jeffrey met for a minimum of two hours a week at their local library branch around their working schedules to pursue Jeffrey’s education goals.

By May 2015, Jeffrey had met and exceeded all of his original goals. He was able to read to his three children and help them with their school needs. He had passed his driver’s tests and obtained his Driver’s License. He was also applying for full-time work for the city in which he resided and was ready to leave our program.

Jeffrey now owns his own fully licensed and insured landscaping business, George Family Landscaping, and is able to financially support his wife and four children with this work. He has a future goal of purchasing his own home. Originally motivated to seek his own education for his family, he is extremely proud to share that one of his young sons has achieved huge academic success and received a scholastic achievement certificate signed President Obama. As a member of his community, Jeffrey has been involved with American Rainbow Rapid Response’s relief efforts loading and unloading supplies and equipment in response to the Hurricane Katrina disaster. Jeffrey enjoys working with children when he can and hopes to have more time to participate in his community – perhaps when he is not quite as busy working!

Jeffrey overcame many challenges to pursue his education as an adult and Laura shares that prior to being able to read, Jeffrey used his innate intelligence and positive demeanor to mask his inability to read. Faced with ordering from a restaurant menu, Jeffrey would request more time to decide, let his companion order first, and then order that as well because it sounded delicious.

Born in Trinidad and Tobago, Jeffrey worked to support his brothers and sisters rather than being able to focus on an early education. From his own current perspective, Jeffrey shares that his biggest challenge was overcoming his own embarrassment about his lack of education and opening up in order to ask for help as an adult. After facing this fear, Jeffrey describes his experience with adult education as one that opened him up to the possibilities and attainment of his life and education goals, but also opened him to spiritual growth and expansion in many other areas of his life. At present, Jeffrey George is a successful business owner, a proud father and family provider, a community member who helps when needed, and a positive, encouraging presence to those fortunate enough to interact with him. When he’s not all that, he continues to study and progress on his own.